Iniesta admitted to a difficult beginning in Barcelona, as he missed his home close to Albacete in central Spain, and later confessed to "crying rivers" because he missed his parents. 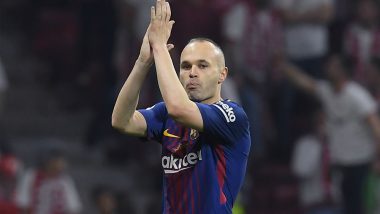 Barcelona, April 27: FC Barcelona captain and veteran midfielder Andres Iniesta announced on Friday that the ongoing 2017-18 football season will be his last at the Catalan club, where he has spent his entire career.

Iniesta joined Barcelona as a 12 year-old and has won 8 La Liga titles (it will be nine by the end of the season), 4 Champions Leagues, 6 Copas del Rey, 3 European and 7 Spanish Supercups and 4 World Club Championships with the club which enjoyed a trophy-laden spell.

"This is my last season here. This was a decision which took a lot of thought. For me, Barça is the best club in the world -- this club has given me everything and and I know what it means to play here year after year in every sense of the word and the responsibility of being captain," the 33-year-old declared at an an emotional press conference at the club's "Joan Gamper" training ground, where he was accompanied by all of his teammates, his family and the club's Board of Directors.

"My only aim was to be a success at this club and I have done that. Being honest with myself and the club, I believe my period here ends this year, because the club deserves the best of me and I don't think that in the near future, I could give the best of myself in all ways; physical and mental. It is best for me to leave this club feeling important, still winning titles," he added.

Iniesta has played 125 times for Spain, winning the 2008 and 2012 European Championships and the 2010 World Cup. The midfielder is rumoured to move to the Chinese Super League. "I have said I will never play against Barça, so I won't play in Europe," Iniesta, who along with retired captain Xavi Hernandez and Sergio Busqets, formed one of the best midfield in European football, said.

"I will always carry Barcelona in my heart. I want to thank the club and the 'Masia' (the Barca youth system) because if I am here today it is thanks to them," said Iniesta, who also thanked his teammates, saying it was "incredible" to be alongside with them every day. He also thanked the fans, who had seen him "grow since I was 12 years old and have supported me in good and bad times."

Iniesta admitted to a difficult beginning in Barcelona, as he missed his home close to Albacete in central Spain, and later confessed to "crying rivers" because he missed his parents.

However, he progressed through the Barca youth team before making his first team debut as an 18-year-old in 2002. Since then he has made 550 appearances for Barcelona, reports Xinhua news agency.

(The above story first appeared on LatestLY on Apr 28, 2018 12:12 AM IST. For more news and updates on politics, world, sports, entertainment and lifestyle, log on to our website latestly.com).