Antony's camp has already informed Ajax to listen to bids for a potential transfer this summer even if the price tag is high. 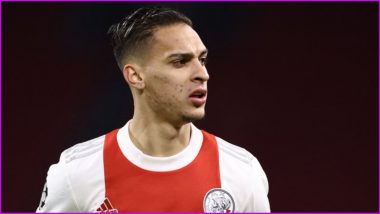 Chelsea have contacted the Ajax star Antony for a possible signing of the 22-year-old winger this summer amid Manchester United's continuous efforts to land the forward at Old Trafford, reports suggest. Antony, who has emerged to be one of the top targets for the Mancunians, has shown interests of leaving Ajax if suitable offer arrives. Manchester United officials are hopeful of signing the star due to the good relation between the player and United's newly appointed coach Erik Ten Hag. Ten Hag has recently left Ajax for the Red Devils and wants his former pupil, Antony also at Manchester in the next season. Manchester United Transfer News: Coach Erik Ten Hag Pushes for Antony’s Signing, Ajax Star Also Interested.

The present United coach is looking to strengthen the attacking front of the club as he is expecting his players to fight for every possible trophy on a high note. According to club sources, Ten Hag believes that Antony is the perfect fit for his dream project at Manchester.

However, Chelsea had a meeting with the player's entourage in recent weeks and are also upbeat of signing the talented winger. Sources say, the West London club and the player's camp met at the UK last week to discuss for a suitable deal for the player which can see him playing for the Blues next year. It is understood that Ajax will ask for a hefty price for the player to allow him to leave the club this summer. With United and Chelsea fighting for Antony, it will be interesting to watch who get to get the last laugh.

(The above story first appeared on LatestLY on Jun 27, 2022 02:31 PM IST. For more news and updates on politics, world, sports, entertainment and lifestyle, log on to our website latestly.com).