ARS vs OLY Dream11 Prediction in UEFA Europa League 2019–20: Tips to Pick Best Team for Arsenal vs Olympiacos Round of 32 Football Match 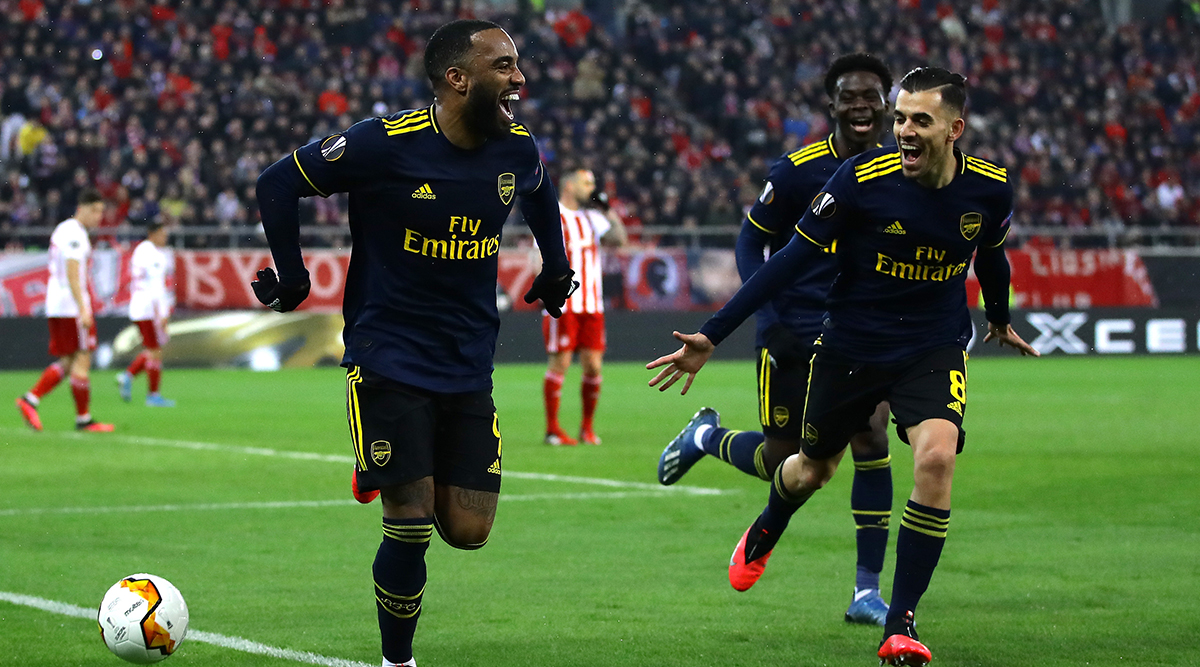 On a run of 10 unbeaten games and three successive wins, Mikel Arteta’s Arsenal will be confident of beating Greek side Olympiacos in the 2nd leg of the round of 32 encounter in 2019-20 Europa League. Arsenal beat Olympiacos 1-0 in Greece thanks to Alexandre Lacazette’s 81st-minute goal and that win, on either side of two assuring league victories over Newcastle United and Everton, has suddenly turned Arsenal’s dwindling fortunes. The Gunners will, however, be up against an Olympiacos side that nearly shocked North London months ago when they visited Tottenham Hotspur for a Champions League group match. Meanwhile, fans of Dream11 fantasy team can scroll down to find all details and team suggestions to pick the right team for ARS vs OLY, EUL 2019-20 last 32 match. Pierre-Emerick Aubameyang Transfer News Update: Boss Mikel Arteta Hopes to Keep Striker at Arsenal Amid Barcelona Interest.

Arteta, who took over Arsenal in December last year, has lost only once in the 12 matches that he has overseen which include wins over Manchester United and Everton. Arsenal beat Everton 3-2 last week with Pierre Aubameyang scoring twice and Bukayo Saka continuing to impress. Young striker Eddie Nketiah also found the net in the win against Everton and will hope for another start.

Lacazette, who scored the deciding goal in Greece last week did not play in the Premier League and is expected to start while January signing Pablo Mari could finally make his debut. The Gunners, however, continue to be without Cedric Soares, Calum Chambers and Kieran Tierney while full-back Sead Kolasinac picked up a shoulder injury against Everton and is a major doubt. For Olympiacos, Ruben Semedo is suspended while Hillal Soudani is out with a long-term knee injury.

Arsenal vs Olympiacos, UEL 2019-20, Dream11 Team Prediction: Goalkeeper – Bernard Leno’s (ARS) late save was key in Arsenal coming out victorious against Everton and he should be picked over Olympiacos’ Jose Sa (OLY) for the goalkeeper’s role.

Arsenal vs Olympiacos, UEL 2019-20, Dream11 Team Prediction: Defenders – Bukayo Saka (ARS) with five assists from as many games is the highest goal-maker in the Europa League this season and is a must pick. He will be joined by club teammates Ainsley Maitland-Niles (ARS) and David Luiz (ARS) in an all-Arsenal defence. Saka also has three assists in his last two games and should be made the vice-captain of this fantasy team.

Arsenal vs Olympiacos, UEL 2019-20, Dream11 Team Prediction: Midfielders – Joe Willock (ARS) is another Arsenal youngster who has impressed this season. He should be picked as one of the four midfielders. The other three will all be from Olympiacos. They are Mathieu Valbuena (OLY), Guilherme Dos Santos (OLY) and Giorgos Masouras (OLY).

Arsenal vs Olympiacos, UEL 2019-20, Dream11 Team Prediction: Forwards – Pierre Emerick-Aubameyang (ARS) with 17 goals is the leader for the Premier League golden boot. He scored another brace in the Everton win and should be the first pick in the forward category. Aubameyang should also be appointed as the captain. Alexandre Lacazette (ARS) who scored the winner in the 1st leg should also be picked and will be joined by Greece League’s top-scorer Youssef Al-Arabi (OLY).

Arsenal, despite their late run, find themselves placed 10th in the 2019-20 Premier League points table and must see the Europa League as the only route to Champions League football next season. They reached the final last season where they lost to Chelsea and will be eager to go one more step this term. Olympiacos, on the other, are unbeaten in the league and are the favourites to retain the Super League Greece title but still remain without a trophy in Europe.