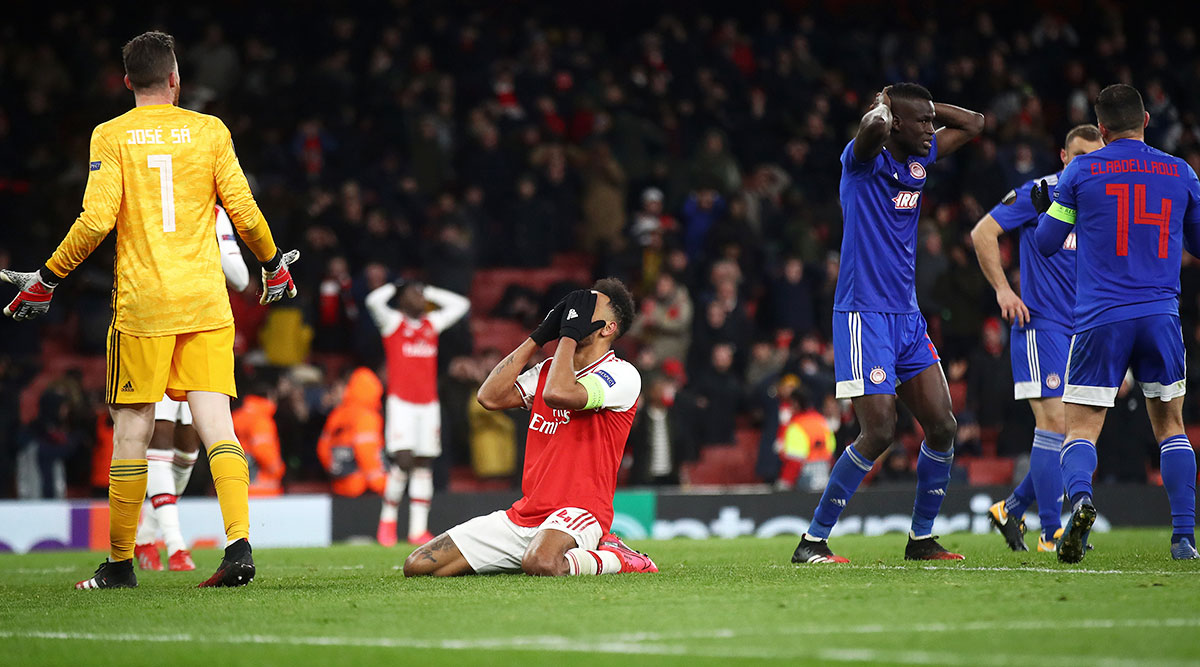 It was yet another heartbreak for Arsenal on the European stage as they were knocked out of the Europa League in the round of 32 by Olympiacos. Pierre-Emerick Aubameyang seemed to have taken the Gunners over the line with an acrobatic goal but the north-London club’s hope were crushed when Youssef El-Arabi scored one minute from time to send the Greek side through to the last 16 of the competition on the away goal rule. This was Arsenal’s worst showing in the Europa League and netizens did not miss out on a chance to troll them. Arsenal 1–2 Olympiacos, UEFA Europa League 2019–20: Gunners Knocked Out of Europe After Shock Defeat at Emirates.

Arsenal succumbed to a 2-1 defeat against Olympiacos in the second leg of Europa League last-32 clash at the Emirates Stadium and were knocked out of the competition on the basis of the away-goal rule. Mikel Arteta’s side won the first leg 1-0 but were shocked by the Greek side as a late goal put them through to the next round. This defeat could have a huge impact on the rest of the season for the Gunners as they could miss out on the Champions League spot for yet another year.

I don't get why Arsenal fans had such huge expectations with Arteta. Man's only coaching experience was handing out bibs.

A Gift That Keeps on Giving

Arsenal fans, the gift that keeps on giving. 😂😂😂 pic.twitter.com/DW0MTC9uBE

What makes the Arsenal defeat even funnier is that these lot were twerking for Gnabry’s “London is red tweet” now they’re sent packing by Olympiacos. Life comes at you fast when you’re shameless

Not A Arsenal Fan

I didn’t even tell the people in my new workplace that I’m an Arsenal fan. Told them I support Le Havre. Gonna walk in tomorrow like nothing even happened.

Arsenal are ninth in the Premier League, seven points behind fourth-placed Chelsea and with qualification for Europe’s premier footballing competition through the league looking unlikely, winning the Europa League was their only hope. This was only Arsenal’s first defeat in the New Year but it could have huge ramifications for the remainder of the season.

Other results in the Europa League also saw some big upsets. FC Porto, Ajax, Benfica, Sporting CP and Celtic have all been knocked out from the competition. The draw for the round of 16 will be held on February 28, 2020 (Friday) as the remaining teams look to get their hands on the elusive trophy.