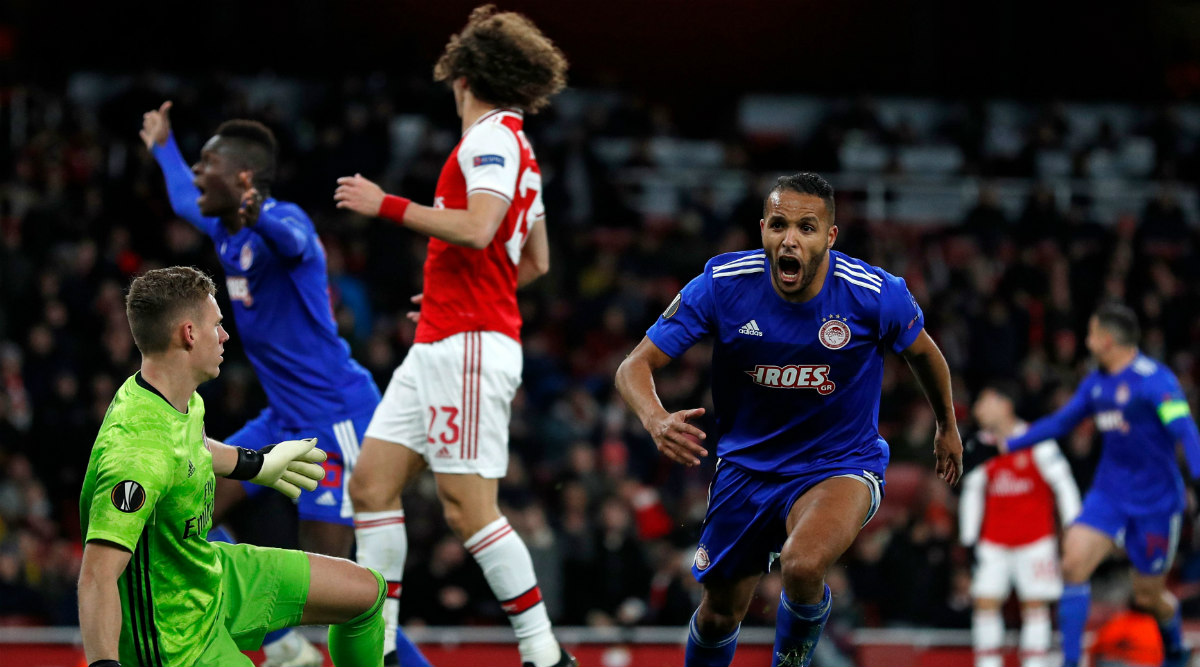 Paris, February 28: Youssef El-Arabi scored in the last minute of extra-time as Olympiakos knocked Arsenal out of the Europa League on Thursday on a night when four former European champions were eliminated.

Ajax, Celtic, Benfica and Porto went out but Manchester United hardly broke sweat after Simon Deli of Brugge conceded a penalty and earned a red card in the 23rd minute at Old Trafford and won 5-0.

Arsenal had won the first leg of the round of 32 tie 1-0 in Greece.

Defender Pape Abou Cisse cancelled out that advantage when he headed in a corner after 53 minutes.

Arsenal could not break through and were forced to extra time.

Giorgos Masouras hit the bar for Olympiakos in the 112th minute and a minute later Pierre-Emerick Aubameyang struck for Arsenal, putting them back in front with a spectacular flying kick.

However, in the final minute of extra time, Arsenal cleared an Olympiakos corner but were still disorganised when the ball was swung back into the area.

The cross found El Arabi free in front of goal for an unchallenged shot.

"Very hard, very tough," said Aubameyang. "Their last-minute goal was unlucky for us."

"It hurts a lot," said Mikel Arteta, the Arsenal manager. "Attack against defence in 25 metres is difficult, but we created enough chances to win the game comfortably."

"We were determined, we believed we could qualify and we made it," said he said. "Tactical intelligence, effectiveness, inner strength, courage...they all weighed in this success."

At Old Trafford, one of United's recent signings Bruno Fernandes gave the hosts the lead with a penalty after Deli's flying intervention.

The other new boy, Odion Ighalo, making his first start, hit his first goal for the club in the 34th minute.

For the Nigerian, who says United were his childhood club, it was a moment to celebrate, but the emotion was mixed.

Ighalo lifted his shirt to reveal a picture of his sister Mary Atole who died suddenly at her home in Canada in December. Ighalo also has her name stitched into his boots.

"I have been waiting for this," said Ighalo. "It's a moment I'll cherish for the rest of my life."

"The football we played at times pleased me the most," said Ole Gunnar Solskjaer, the Manchester United manager.

"The players are smiling, they are playing with confidence and that is what we want. The new lads have brought that in."

That left the home needed needing to score four, they managed two, the first from young Brazilian Danilo Pereira, with his first for the club, and an own goal when Mathias Olivera deflected a free kick. Getafe held on comfortably.

Copenhagen scored three goals on three shots as they won 3-1 at Celtic, but deserved the victory.

Jozo Simunovic's weak back pass gave Copenhagen the ball close to goal after 51 minutes and Micheal Santos completed the punishment.

With seven minutes left, Odsonne Edouard levelled with a penalty but as Celtic tried to press, their defence panicked twice in the last five minutes. Pep Biel and Dame N'Doye coolly accepted the gifts to make the aggregate score 4-2.

"It just wasn't our day and we're big boys, we can take it on the chin and we've got to make sure we bounce back," said Celtic captain Craig Brown

Benfica went out 5-4 on a aggregate after repeatedly throwing away the initiative as they drew 3-3 at home to Romanians Cluj.

Porto subsided 3-1 at home to Bayer Leverkusen to go out 5-2 overall.

Inter Milan beat Ludogorets 2-1 to advance 4-1 in a match played in an empty San Siro because fans were banned to avoid spreading coronavirus.

The game between FC Salzburg and Eintracht Frankfurt was postponed because of a forecast of dangerously high winds and will be played on Friday.