Arsenal vs Lyon friendly clash will be played at the Al-Maktoum Stadium in Dubai on December 08, 2022 (Thursday). The game has a start time of 09:00 PM IST. 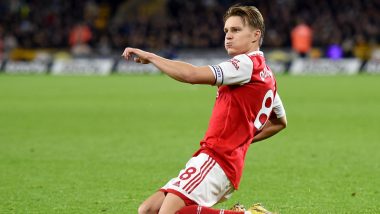 Arsenal takes on Lyon at the Al Maktoum Stadium in Dubai looking to gain some fitness and momentum as the post-World Cup campaign awaits the team the Gunners. They currently lead the English Premier League table by 5 points and have played some mesmerizing football in the first half of the season. It will be the first since the 2007/08 season that they will be top of the league in Christmas and for the fans there is a belief that the side can clinch the title. French side Lyon is struggling at the 8th in the points table and they will need significant lift to climb up the ladder and qualify for Europe. They will be treating this warm-weather tournament in Dubai with utmost seriousness as they come up against quality sides. Cadiz 4-2 Manchester United, Club Friendly: Erik Ten Hag's Side Face Defeat in Their First Outing Since Cristiano Ronaldo Exit.

Gabriel Jesus has undergone a knee surgery and is a long-term absentee for Arsenal. The Gunners might look to the winter transfer window to fill the void left by the Brazilian forward. Emil Smith Rowe is in the squad but is unlikely to face Lyon. Ben white withdrew from the England squad for the World Cup and is set to miss the Dubai trip with Arsenal. Martin Odegaard, the club captain is in the team and all set to play a key role this evening.

Lyon will be without their influential full-back Nicolas Tagliafico as he is representing his country in Qatar. Jerome Boateng continues to recover from his knee injury and will not face Arsenal. Alexandre Lacazette comes up against his former club and he will have some added motivation to do well after he was let go in the summer.

When is Arsenal vs Lyon, Club Friendlies 2022? Know Date, Time and Venue

Arsenal vs Lyon friendly clash will be played at the Al-Maktoum Stadium in Dubai on December 08, 2022 (Thursday). The game has a start time of 09:00 PM IST.

Where To Watch Live Telecast Of Arsenal vs Lyon, Club Friendlies 2022 on TV?

How To Get Free Online Live Streaming Of Arsenal vs Lyon, Club Friendlies 2022?

(The above story first appeared on LatestLY on Dec 08, 2022 01:08 PM IST. For more news and updates on politics, world, sports, entertainment and lifestyle, log on to our website latestly.com).