Atletico Madrid and Chelsea clash in the first leg of the UEFA Champions League round of sixteen fixture, with both sides having contrasting fortunes in their respective league. Spanish outfit Atletico Madrid look like the favourites to lift the La Liga title this season while Chelsea know they have a struggle ahead of themselves to play in the Champions League next season. 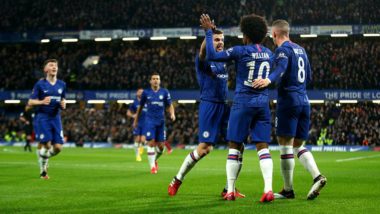 Hector Herrera has tested positive for the coronavirus and is currently in quarantine. The midfielder is joined on the sidelines by centre-back Jose Gimenez, who took a nasty knock against Levante in the previous game. Luis Suarez, the man deemed unfit to play at the highest level by Barcelona, has been brilliant so far for the Spanish league leaders. He will have Angel Correa as his strike partner with Saul Niguez and Marcos Llorente providing the width. Koke in central midfield is crucial to his team’s chances with his mobility on the pitch. As the game takes a countdown, let’s look at the streaming and other details.

Atletico Madrid vs Chelsea match in UCL 2020-21 will be played at the National Arena in Romania. The match will be held on February 24 (Wednesday midnight) and it is scheduled to begin at 01:30 am IST (Indian Standard Time).

Fans in India can watch the live telecast of the Atletico Madrid vs Chelsea match on Sony Ten channels. Sony Ten Network is the official broadcaster of the UEFA Champions League 2020-21 in India. So fans can tune into Sony Ten 1 and Sony Ten 1 HD channels to watch the game live.

Live streaming of the UEFA Champions League match between Atletico Madrid vs Chelsea first leg will be available on SonyLiv.

Christian Pulisic and Kai Havertz are both in contention for some game time against Atletico Madrid, which is brilliant news for the visitors. Callum Hudson-Odoi is expected to start after being substituted just thirty minutes into his game time against Southampton. Jorginho and Mateo Kovacic are the preferred first-choice central midfield pairing which means N’Golo Kante will have to content himself with a place on the bench.

Atletico Madrid at home will be a tough assignment for Chelsea, and the hosts should secure an early advantage in this tie.

(The above story first appeared on LatestLY on Feb 23, 2021 03:03 PM IST. For more news and updates on politics, world, sports, entertainment and lifestyle, log on to our website latestly.com).