In the Saturday interview for the Polish paper Przeglad Sportowy, Lewandowski told how he had reacted after the information that there will be no winner this year, reports Xinhua news agency. 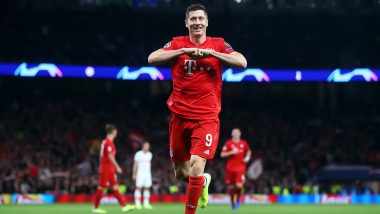 Warsaw, August 30: Bayern Munich striker Robert Lewandowski said on Saturday that if the Ballon d'Or wasn't cancelled, he should have been given a reward as he won everything this season.

In the Saturday interview for the Polish paper Przeglad Sportowy, Lewandowski told how he had reacted after the information that there will be no winner this year, reports Xinhua news agency.

"If the organizers didn't cancel the Ballon d'Or, I should have been the winner. I won everything this year. Winning the Champions League was my greatest dream and I achieved it. I'm really proud of that. In the final game against PSG, I didn't score but I worked really hard for my team," he said. Robert Lewandowski Finishes As Europe’s Top-Scorer As Bavarians Win Sixth Champions League Title.

Lewandowski had a perfect season to win the treble with Bayern Munich. The 32-year-old became the top scorer of the Bundesliga and Champions League. He was believed to be a strong favourite to win Ballon d'Or but the France Football magazine cancelled the vote due to the Covid-19 pandemic in June.

In the Champions League final, Bayern beat PSG 1-0 thanks to Kingsley Coman's goal from the second half.

"PSG created their chances but I knew that we would win this match. After finding the net, we had everything under control. In the final phase of the match, Philippe Coutinho and Ivan Perisic came in and the opponent got a message that we will put the pressure on them until the end. We felt that It could be our year for a long time," explained the Poland captain.

The player also talked about his next objectives. "We would like to lift the European Supercup and German Supercup. The more you have, the more you want. We have a young, strong team. It seems to me that none of us will be satisfied with what we just won," said the attacker.

(The above story first appeared on LatestLY on Aug 30, 2020 01:18 PM IST. For more news and updates on politics, world, sports, entertainment and lifestyle, log on to our website latestly.com).