The Ballon d’Or dream team of 11 players was picked from an original shortlisted players 110 footballers from which 140 different journalists voted for the greatest players in every position of the pitch. The dream team lines up in a 3-4-3 formation with Ronaldo and Messi the only active footballers in the dream team. 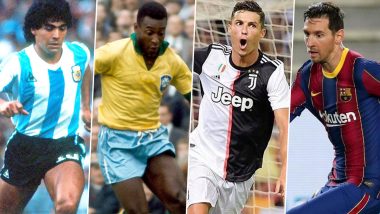 France Football, on Monday, announced their Ballon d’Or dream team, which has been selected by the votes of 140 sports journalists from all around the world. France Football announced three different teams for the Ballon d’Or dream team with the first team made of 11 best players of all time. Late Diego Maradona, Pele, Cristiano Ronaldo and Lionel Messi were all part of the Dream team. Each of the three teams was filled with footballing legends and greats from different generations. Cristiano Ronaldo Nominated for Best Player of the Year 2020 and Player of the 21st Century at Dubai Globe Soccer Awards, Juventus Superstar Says ‘Honoured and Proud to Be Among Finalists’.

⭐After the votes of 140 journalists from all around the world, here is the #BOdreamteam with 11 best players of all time ! ⭐ pic.twitter.com/FsKAoSyGZL

Lev Yashin, who is regarded as the greatest goalkeeper of all-time and was called the black spider during his playing days, was named as the goalkeeper. Brazilian legend Cafu, Germany’s Franz Beckenbauer and AC Milan and Italy legend Paolo Maldini were named as the three defenders in the team. Lothar Matthaus and Xavi controlled the midfield with Pele and Maradona in attacking positions on the flanks.

France Football also announced the second squad and the third squad for the Ballon d’Or dream team. The Ballon d’Or awards 2020 was scrapped for this year due to the coronavirus pandemic.

(The above story first appeared on LatestLY on Dec 15, 2020 09:09 AM IST. For more news and updates on politics, world, sports, entertainment and lifestyle, log on to our website latestly.com).