The veteran Argentine striker was signed for free by Barcelona on a two-year deal on Monday in one of the most talked about transfers in this summer window. He also has a release clause of 100 million euros. 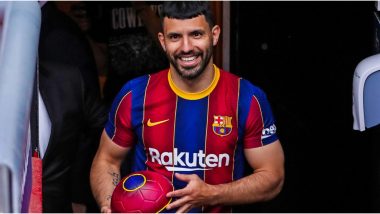 Barcelona new signing Sergio Aguero on Monday said that Catalan giants were the best club in the world. As a matter of fact, he revealed that it was actually the last thing that Pep Guardiola, his former manager at Manchester City told him, before he left for Spain. The veteran Argentine striker was signed for free by Barcelona on a two-year deal on Monday in one of the most talked about transfers in this summer window. He also has a release clause of 100 million euros. Manchester City Posts Heartfelt Video As Sergio Aguero Leaves the Club Amid Reports of him Joining Barcelona

Revealing details of his last conversation with Guardiola, Aguero, while being presented as a Barcelona player, said, "The only thing that I remember is that, when we won the Premier League, we had lunch. He said to me: ‘You’re going to the best club in the world.’ Those were the last words.”

“I said before to president Laporta that, when I was a kid, I said that one day [Barcelona] would want me, one day they’d look at me. It happened, of course. When this opportunity came… any player who you give this opportunity to will come running. That’s what I did. I want to show here what I have shown at City," he added further. Barcelona Announce Signing of Sergio Aguero

Aguero leaves behind a trail of records in the Premier League after having attained a lot of success with Manchester City. However, a knee injury followed by a surgery, prevented him from playing a major role in City's Premier League title win this season and in their journey to the recently concluded Champions League final, where they lost to Chelsea.

Talking about his fitness, the 32-year old said that he was feeling good about his knee. “I’ve felt really good this last four months and the most important thing is that my knee is perfect," he said.

Aguero now is set to join the Argentina national team where he would play with his Barcelona teammate and friend, Lionel Messi. The Copa America, a day ago, was moved from Argentina to Brazil owing to a rise in COVID-19 cases.

(The above story first appeared on LatestLY on Jun 01, 2021 04:49 PM IST. For more news and updates on politics, world, sports, entertainment and lifestyle, log on to our website latestly.com).