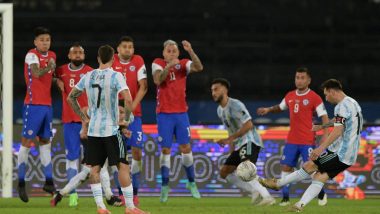 Action during the Argentina vs Chile match (Photo credit: Twitter)

Lionel Messi once again showed why he is considered to be the best with a stunning free-kick but Chile fought back with an opportunistic goal in their opening match of the 2021 Copa America against Argentina, on Tuesday. Argentina deservedly got the lead in the 33rd minute with Messi's magical free-kick but that wasn't enough as Chile bounced back to score a rebound after goalkeeper Emiliano Martinez had saved a penalty from seasoned Chile star Arturo Vidal in the 55th minute. A tribute was made to Argentine legend Diego Maradona, who passed away last November before the match began with no crowd presence, owing to the COVID-19 restrictions. Copa America 2021 Points Table Updated: Groups, Leaderboard and Team Standings of CONMEBOL

Messi missed an opportunity to score as early as in the eighth minute when midfielder Leandro Paredes found Nicolas Taglifiaco on the left. The left-back then passed the ball to Messi, whose volley went just wide of the goal.

Lionel Scaloni's men kept on pushing for an opener and their dominance was well rewarded when Messi curled in a free-kick from 25 yards with the ball just missing Chile goalkeeper Claudio Bravo's fingertips. Lautaro Martinez should have doubled their lead soon afterwards but he shot wide of the target.

Chile came back with more determination in the second half and forced Martinez to make an early save from Vargas' shot. Vidal's rebound caught Taglifiaco and the referee awarded the former Copa America champions a penalty. And although Vidal's shot was saved by Martinez, Vargas found the rebound and headed it straight into the net to level the score.

Messi found an opening within the box and his low-shot was subsequently saved by Bravo. With 10 minutes remaining, Nicolas Gonzales got an opportunity to score the winner after he found Messi's pass perfectly. But he could only head it over the post.

(The above story first appeared on LatestLY on Jun 15, 2021 09:06 AM IST. For more news and updates on politics, world, sports, entertainment and lifestyle, log on to our website latestly.com).