Costa Rica Squad for 2018 FIFA World Cup in Russia: Lineup, Team Details, Road to Qualification & Players to Watch Out for in Football WC

Costa Rica is in Group E with the likes of Brazil, Serbia and Switzerland. They will play their first match on June 17 against Serbia followed by Brazil on June 22 and Switzerland on June 27. 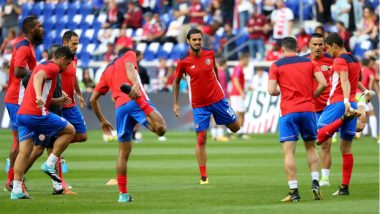 Costa Rica exceeded expectations in Brazil four years ago when they put in a magic performance at the World Cup finals where they topped a group consisting of England, Uruguay and Italy. Those performance level will be difficult to match this time around in the FIFA World Cup 2018 in Russia with the core group of the 2014 event being more or less as fringe players in their respective clubs barring Keylor Navas, the Real Madrid shot-stopper and probably their most famous player in their World Cup squad. FIFA World Cup 2018 Schedule in IST for PDF Download: Fixtures, Groups, Time Table with Match Timings & Venue Details of Football WC in Russia.

The defense line up has two very important players in Giancarlo Gonzalez and Bryan Oviedo and the man who scored that massive goal against Honduras, Kendall Watson. The midfield will have skipper Bryan Ruiz who was in fine form in the last World Cup in 2014 and has experience of playing in top leagues. Joel Campbell, who is currently on loan with Real Betis from Arsenal, will be under pressure to deliver with all the talk of his immense potential doing the rounds for the past many years without any real delivery.

The injury to Christian Bolanos is a cause of worry for Costa Rica and the midfielder’s presence is crucial for their World Cup journey. Celso Gamboa of Deportivo La Coruna will be hoping he makes it to the starting eleven if Bolanos injury hampers his progress.

Costa Rica qualified via the automatic route when they finished second behind Mexico in the fifth round of the CONCACAF World Cup 2018 qualifiers. A 1-1 draw against Honduras ensured the smooth passage of Costa Rica into the World Cup. They had previously won the fourth round of CONCACAF qualifiers when they topped Group B with 16 points winning five out of the six matches played.

They defeated Italy and Uruguay, two countries miles ahead of them in both talent and history and topped the group by going undefeated as England failed to score past them settling for a draw. This was followed by two penalty shoot-out games against Greece in the round of 16 and Netherlands in the quarters. While the round of 16 brought joy, heartbreak followed in the quarterfinals. Many believe they should have buried the Dutch in normal time, but failure to do so was costly.

Keylor Navas: He is undoubtedly the most famous Costa Rican player as he represents one of the top clubs of the world in Real Madrid. His fine form has seen his club become a European powerhouse again and it would be a surprise if he does not deliver in Russia.

Bryan Ruiz: The Costa Rican captain is the heart of the side with his style of play contributing immensely to the team. His set-piece deliveries are world class, and his ability to track back makes him the apple of his coach’s eye.

Costa Rica is in Group E with the likes of Brazil, Serbia and Switzerland. They will play their first match on June 17 against Serbia followed by Brazil on June 22 and Switzerland on June 27.

(The above story first appeared on LatestLY on May 17, 2018 09:37 PM IST. For more news and updates on politics, world, sports, entertainment and lifestyle, log on to our website latestly.com).