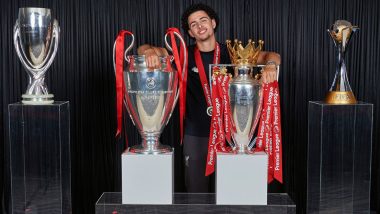 Jurgen Klopp is man known for not tinkering too much with his first-team squad and their title-winning run bears testimony to it. But the German gaffer did play a few youngsters in the Cup competitions in the season gone by who impressed him in training. The most prominent amongst them has been midfielder Curtis Jones who has got himself a Premier League medal and the tag of being the youngest skipper of Liverpool at 19 years when he donned the skipper’s armband against Shrewsbury. The youngster has mentioned how he idolised Portuguese skipper Cristiano Ronaldo growing up as a kid but has now shifted base to club legend Steven Gerrard. Kylian Mbappe Picks Cristiano Ronaldo as his Idol Ahead of Lionel Messi.

It has been a breakthrough season for Curtis Jones with Jurgen Klopp showing immense faith in his abilities. He was a constant presence in Liverpool’s FA Cup and League Cup trophies and also notched up 6 League appearances which is never easy for a youngster at a club led by Jurgen Klopp. As a kid, Jones was mesmerised by Cristiano Ronaldo. He wanted to play like the former Manchester United man but with times he has begun appreciating more players. But being a Liverpool player, Steven Gerrard is the icon that drives everyone to succeed. According to Curtis Jones, Steven Gerard is a symbol of the city and an absolute hero growing up. Liverpool Should Reward Jurgen Klopp With a Statue, Says Steven Gerrard.

Being an attacking midfielder, it is easy for Curtis Jones to emulate Steven Gerrard’s game but the youngster has emphasised on how the former England captain taught him the art of tackling and running the extra miles in games. The coming season for Curtis Jones is important as he hopes to avoid being a one-season wonder and get a constant run in the first team. He has already made his friends and family proud by lifting the EPL trophy being a local lad.

(The above story first appeared on LatestLY on Aug 02, 2020 12:05 PM IST. For more news and updates on politics, world, sports, entertainment and lifestyle, log on to our website latestly.com).