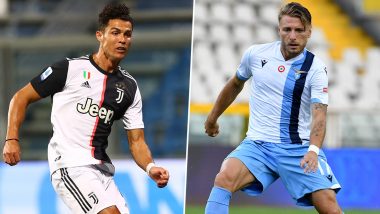 The Golden Shoe award for the 2019-20 season will have an unfamiliar name on it as Lazio striker trumped Robert Lewandowski and Cristiano Ronaldo to finish the season as Europe's leading marksman. The 30-year-old has had a record-breaking individual season which has helped his team Lazio finish fourth in the Serie A table and qualify for the Champions League after a long absence. Ciro Immobile Leads European Golden Shoe Race After Cristiano Ronaldo Struggles.

On Saturday (August 1, 2020), Ciro Immobile struck in the 3-1 loss against Lazio to take his tally to 36 goals in the league for the current season. With this goal, the 30-year-old striker not only equalled Gonzalo Higuain’s record for most goals in a single Serie A season but also confirmed himself as the leading scorer across European leagues. Cristiano Ronaldo to Miss Out on Two Big Records After Being Excluded From Juventus’ Squad for Final Serie A 2019–20 Match Against Roma.

With 36 Serie A goals to his name, Ciro Immobile confirmed his first Golden Shoe trophy ahead of the likes of regular winners such as Cristiano Ronaldo and Lionel Messi. The Lazio stars closest competitor was Bayern’s Lewandowski, who scored 34 goals in the Bundesliga while Juventus’ Ronaldo had managed 31 strikes this season.

Lionel Messi, who is the record winner of the award (six), managed to find the back of the net 25 times in La Liga this campaign while Leicester City’s Jamie Vardy was Premier League’s top scorer with 23 strikes to his name.

Immobile has scored a total of 39 goals this season across all competitions but will not be able to add to his tally as Lazio have no European competitions to look forward to. However, the striker won’t be too bothered about it as he will take some deserved rest before coming back to break further records when the 2020-21 season begins.

‘I am super happy and proud of what I've achieved, especially when I look back to where I started and everything I went through,’ Immobile told Lazio Style Channel. ‘If you truly believe, sometimes, dreams do come true. I can only thank the coach and staff, my team-mates, and I can assure you these records are for the whole team.’ He added.

(The above story first appeared on LatestLY on Aug 02, 2020 09:27 AM IST. For more news and updates on politics, world, sports, entertainment and lifestyle, log on to our website latestly.com).