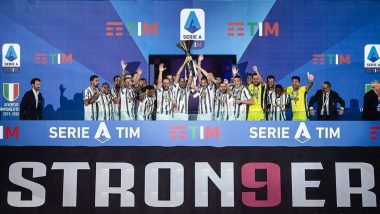 Juventus continued their dominance in Italy’s domestic league as they lifted their ninth consecutive Serie A title following the game against AS Roma at the Allianz Stadium on Sunday (August 1, 2020). The Bianconeri were confirmed as champions of Italy with two games to spare but were presented with the trophy in their last home game of the season and here is how the Juventus players celebrated the title. Juventus Share Pictures of Cristiano Ronaldo and Co. Celebrating Serie A 2019–20 Title Win.

Juventus had a bit of scare post lockdown but Maurizio Sarri’s men dug deep and got over the line to win their ninth successive Serie A title. This is the Black and Whites’ 36th league crown which is twice more than their nearest rivals AC Milan who are on 18 titles. The Rossoneri last won the championship in 2010-11 season after which it has all been the Bianconeri. Cristiano Ronaldo Adds Bugatti Centodieci to His Car Collection to Celebrate Juventus’ Serie A 2019–20 Title Win.

Juventus players have endured a difficult season hence they were over the moon while receiving the trophy, a testament to the grit and determination they have shown over the course of 38 games in the season. So it was not surprising that the Juventus squad celebrated wildly as they lifted the title.

This league title was special for both Juventus players and their manager. The likes of Aaron Ramsey, Adrien Rabiot won their first title in Italy as players while Maurizio Sarri finally got his hands on a league trophy for the first time in his managerial career. This is the second major trophy in the Italian coach’s career.

Cristiano Ronaldo played an important part in this title win as he became the first Juventus player in 60 years to score 30-or more league goals in a single Serie A season. He finished the campaign with a tally of 31 strikes in 33 games.

No other team in Europe have managed to match Juventus’ dominance in their respective leagues. Their run of nine consecutive domestic first division titles are more than any other club in Europe’s top five footballing leagues.

(The above story first appeared on LatestLY on Aug 02, 2020 01:53 PM IST. For more news and updates on politics, world, sports, entertainment and lifestyle, log on to our website latestly.com).