The star forward, rumoured to be leaving the club at the end of what has been a disappointing season, hinted that he stay instead and help them get their glory days back. Manchester United broke a chain of poor results with a 3-0 win over Brentford on Tuesday. 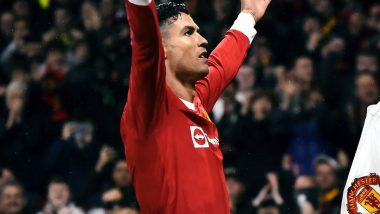 Cristiano Ronaldo might not just leave Manchester United after the forward signalled his intention of remaining at the club beyond this season. Ronaldo once again found the net as Manchester United clinched a routine victory over Brentford in the Premier League on Tuesday. This was their first win since they defeated Norwich City last month. Ronaldo had joined Manchester United last summer in a sensational return from Juventus and has turned out to be the best player for the club this season. Kevin Pietersen Compares Virat Kohli To Cristiano Ronaldo, Says the Two Are Legends in Terms of Greatness

He also recently scored his 100th Premier League goal. Taking to Instagram, Ronaldo thanked the Manchester United supporters for sticking by the club in what has been a difficult season for them and wanted to have the glory days back at the club. "Glory for Man. United!," he wrote.

There were a lot of speculations over Ronaldo's future that arose following Manchester United's poor form this season. Many stated that Ronaldo would be on his way out should the Red Devils fail to qualify for the Champions League. As of now, Manchester United's path to the UEFA Champions League next season looks incredibly difficult as they trail fourth-placed Arsenal by five points.

But if this is any indication, it seems Ronaldo might stay back at United to fulfill his two-year contract at the club. Earlier, it was also reported that Real Madrid wanted to bring the Portuguese star back to the Santiago Bernabeu.

(The above story first appeared on LatestLY on May 03, 2022 04:25 PM IST. For more news and updates on politics, world, sports, entertainment and lifestyle, log on to our website latestly.com).