Cristiano Ronaldo is still contemplating his future at Juventus and Paris Saint Germain’s new project and transfer strategy has caught the eye of the 36-year-old who is intrigued by their approach. The Parisian outfit have been one of the most active teams in the transfer market having already signed Georginio Wijnaldum, Sergio Ramos and Achraf Hakimi. 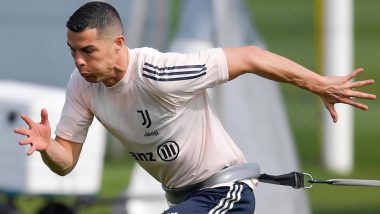 Cristiano Ronaldo’s future at Juventus remains uncertain as the five-time Ballon d’Or winner is in the final year of his contract with the Bianconeri outfit and is yet to put pen to paper on a new deal to extend his stay. There are reports that the Portuguese star could be on his way out of the Turin outfit following their disappointing campaign last season, where they underperformed in Europe and domestic competitions. 'Cristiano Ronaldo's Personal Interests Difficult to Manage' Says Maurizio Sarri Ahead of Serie A 2021-22.

According to a recent report from Foot Mercato, with Cristiano Ronaldo still contemplating his future at Juventus, Paris Saint Germain’s new project and transfer strategy has caught the eye of the 36-year-old who is intrigued by their approach. PSG Announce Signing Of Sergio Ramos On Free Transfer.

The Parisian outfit have been one of the most active teams in the transfer market as they have already signed Liverpool’s Georginio Wijnaldum and Real Madrid skipper Sergio Ramos on a free transfer along with signing Achraf Hakimi from Inter Milan for a fee of around €70 million. In addition, it is expected that Italy’s number one Gianluigi Donnarumma is also on his way to Paris after the Euros.

It is understood that though the French club’s strategy has intrigued Cristiano Ronaldo, the Portuguese is in no rush to decide is future as he is currently on vacation with his family and wants to converse with new Juventus manager Massimiliano Allegri first about his role in the team next season.

However, Cristiano Ronaldo’s future could lie away from Turin as the club won’t stand in the way of he wants to leave. And with former Real Madrid players such as Angel di Maria, Keylor Navas and Sergio Ramos already in the PSG ranks, it could be an intriguing proposition for the 36-year-old, who has reportedly held discussions with the Parisian officials.

(The above story first appeared on LatestLY on Jul 09, 2021 09:29 AM IST. For more news and updates on politics, world, sports, entertainment and lifestyle, log on to our website latestly.com).