Amid the speculations of Cristiano Ronaldo's uncertain future at Manchester United, David Beckham wanted to lure him into Inter Miami this summer, but only to be rejected by the 37-year-old forward. 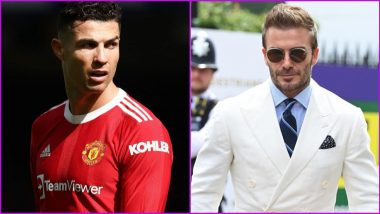 Cristiano Ronaldo has reportedly rejected an offer to join his former Manchester United teammate David Beckham's Inter Miami this summer. Ronaldo, who currently plays for the Red Devils, is not happy with the current team management's strategy in the transfer market and might consider leaving the club if suitable offers arrive, reports suggest. Chelsea's new owner had already a meeting with the Portuguese star's agent, Jorge Mendes, to discuss a possible transfer of the five-time Ballon D'Or winner from Old Trafford to Stamford Bridge. Many are of the view that after taking over the London-based club recently, Todd Boehly has a vision of renovating the squad fully and wants to make Ronaldo the face of the club. Cristiano Ronaldo Transfer News: Sporting CP Return 'Could Happen' Says Club's Director.

However, Manchester United have clearly stated that Ronaldo is not for sale, at least for the 2022-23 season. United's newly appointed coach Erik Ten Hag has informed the club that the 37-year-old forward is in his plans for next season and does not want to sell him.

Meanwhile, David Beckham, who is the owner of MLS side Inter Miami, had shown interest in signing Ronaldo for his club as the forward's future at Old Trafford is unclear, and he reportedly contacted the Portuguese's entourage. But, the highest goal scorer in football history has snubbed Beckham's proposal as he does not want to leave European football yet.

The five-time champions league winner is currently on a summer vacation with his family in Mallorca and is yet to join the pre-season training camp of Manchester United, which kicked off on June 25 under the watch of new coach Ten Hag.

(The above story first appeared on LatestLY on Jun 27, 2022 02:05 PM IST. For more news and updates on politics, world, sports, entertainment and lifestyle, log on to our website latestly.com).