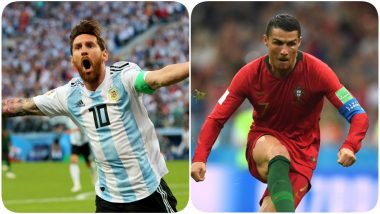 Cristiano Ronaldo and Lionel Messi’s have been compared to each other since eternity. The two football stalwarts have their own fan base and the fans never to forget to take a jibe at each other’s gang on social when one of them does well. Now, here’s another viral thread which explains why Lionel Messi’s international career is so underrated as compared to CR7.  Internation career is one of the most important aspects which is considered while debating. So the thread starts with the Argentine having 14 Golden Ball awards, Copa 15 Golden Ball, seven Best Young player awards, five U20 Golden Boot and Golden Global awards. Love Is in the Air! Lionel Messi's Wife Antonella Roccuzzo Kisses Him Sweetly on Cheek In Cute PDA Pics.

Talking about the players, Lionel Messi is currently holidaying in Ibiza with his wife and kids after a gruelling season with Barcelona. The pictures of his holiday are going viral on social media. Whereas, Cristiano Ronaldo is prepping up for his next Serie A 2019-20 game against Sampdoria which will take place on July 27, 2020, at the Allianz Training Center.

(The above story first appeared on LatestLY on Jul 25, 2020 02:51 PM IST. For more news and updates on politics, world, sports, entertainment and lifestyle, log on to our website latestly.com).