Manchester United have too much quality in their team, and a routine win awaits them against Derby County. Expect Bruno Fernandes to shine again for the visitors. 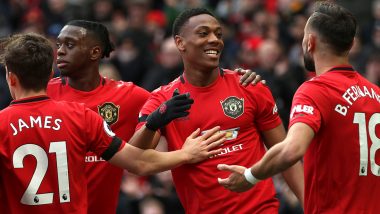 An inform Manchester United travel to Pride Park to take on Derby County in the fifth round of the FA Cup. The game is special in more than one way as Red Devil legend Wayne Rooney comes up against his former club. The former England captain still packs a punch when it comes to competitive football, and it will be an emotional moment for Manchester United fan to watch their idol in action. On the football front, Ole Gunnar Solskjaer's men are on eight-game unbeaten run. They start the contest as firm favourites and for Derby County to cause an upset, a special performance is needed. SHF vs MCI Dream11 Prediction in FA Cup 2019–20: Tips to Pick Best Team for Sheffield Wednesday vs Manchester City Football Match.

Sergio Romero will start between the posts for Manchester United which is likely to give some breathing space to an underfire David De Gea. Daniel James is set to miss another game for United while Paul Pogba needs a week to begin first-team training. Manchester United's star man Bruno Fernandes will be tasked with creating the chances for the visitors but needs the other attackers like Anthony Martial and Mason Greenwood to show more fight in the final third. Brandon Williams could come in for Aaron Wan Bissaka should the former Crystal Palace man fail the fitness test.

Tom Huddlestone will continue to remain absent for Derby County owing to a calf injury. Louie Sibley and Morgan Whittaker are part of the matchday squad for the hosts, and the young guns could be part of the starting eleven. All eyes will be on Wayne Rooney who in his floating role in midfield could hurt the Red Devils with some exquisite passing game.

Derby County vs Manchester United match will be played at the iPro Stadium on March 06, 2020 (Thursday mid-night). DER vs MUN football match is scheduled to start at 01:15 am IST (Indian Standard Time).

Derby County vs Manchester United match will be telecast live on Sony Sports Networks as it is the official broadcaster of FA Cup in India. Fans can enjoy the action of DER vs MUN clash live on Sony Ten 2, Sony Ten 2 HD, Sony ESPN and Sony ESPN HD.

Live streaming of Derby County vs Manchester United match will be available on Sony Liv, the official online media streaming platform of Sony Pictures Network in India. Manchester United have too much quality in their team, and a routine win awaits them against Derby County. Expect Bruno Fernandes to shine again for the visitors.

(The above story first appeared on LatestLY on Mar 05, 2020 08:00 PM IST. For more news and updates on politics, world, sports, entertainment and lifestyle, log on to our website latestly.com).