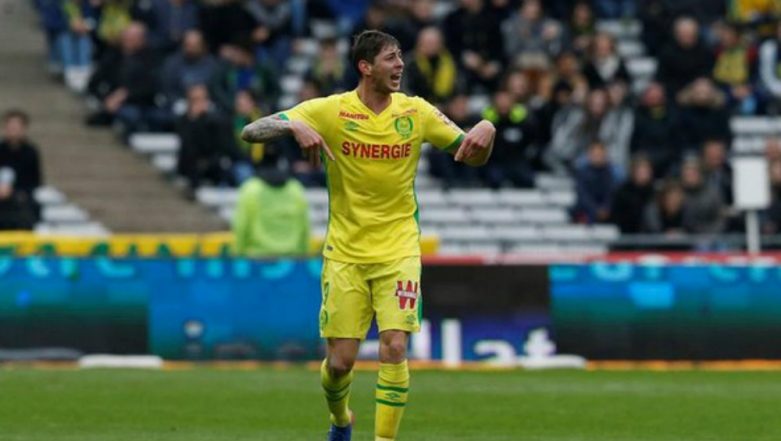 London, January 23: Officials have labelled the chances of survival for Cardiff City footballer, Emiliano Sala, who was on board the plane which dropped off the radar over the English Channel, as "slim".

"We have found no signs of those on board. If they did land on the water, the chances of survival are at this stage, unfortunately, slim. Two planes and a lifeboat are still searching," Guernsey Police tweeted.

Sala had recently signed with Cardiff City in a record deal reportedly amounting to USD 19.3 million and was on his way back from France after bidding adieu to his former Nantes teammates. Emiliano Sala, Cardiff City FC’s New Signing, Feared to Be on Missing Alderney Plane.

"We were very shocked upon hearing the news that the plane had gone missing. We expected Emiliano to arrive last night into Cardiff and today was due to be his first day with the team," Cardiff City FC Executive Director & CEO Ken Choo remarked on Tuesday.

"We continue to pray for positive news," Choo outlined, adding that training had been called off in light of the incident.

Search and rescue efforts will continue on Wednesday for the single turbine Piper Malibu aircraft which was flying from Nantes to Cardiff when it dropped off the radar.

An area of 1,155 square miles had been searched until Tuesday by authorities in an effort that has lasted over 15 hours. Multiple planes and lifeboats have been used in operations.

Adverse weather conditions had hampered search efforts initially. A number of floating objects have been seen in the waters by the authorities - however, there is no confirmation if the objects belong to the missing plane.

The Cardiff City forward had started his career in 2012 in France with Bordeaux. He had scored 42 goals for Nantes, after joining the club in 2015.