England is placed in Group G of FIFA World Cup 2018 along with Tunisia, Panama and Belgium. 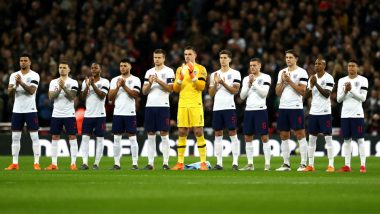 One team despite its several flaws has its fair share of media buzz is the English football team and the 2018 FIFA World Cup is no different with expectation running high from fans and media alike. Gareth Southgate's men have a long list of players to pick from who play week in week out at probably the highest level of football we can imagine yet always fail to turn up when it matters. The English FA is determined that this bunch of English players will inspire their nation in Russia and will certainly not make a group stage exit. Manager Gareth Southgate picked his 23-man world cup squad leaving Joe Hart and Jack Wilshere out of the England team lineup. FIFA World Cup 2018 Schedule in IST for PDF Download: Fixtures, Groups, Time Table with Match Timings & Venue Details of Football WC in Russia.

The team has been crippled with injuries off late with midfielder Alex Oxlade Chamberlain out of the World Cup with a knee injury and Joe Gomez another notable absentee. Tottenham's right back Kieran Trippier will be assessed by the English medics to determine his availability for the World Cup. Alexander Arnold, who has been in great form with Liverpool and has shown tremendous progress might make it to Russia with Southgate mulling over his inclusion. Danny Rose and Kyle Walker will surely be on the plane and will surely be joined by Chris Smalling and Phil Jones. There is a growing clamour to include Ashley Young in the team, and the veteran winger turned defender will be hoping to make the cut.

Midfield will comprise of Jordan Henderson, Dele Alli and Eric Dier as starters and Jack Wilshere as a backup with the Arsenal man ready to make a comeback in the England setup. Gareth Southgate has a resurgent Raheem Sterling and the dynamic Marcus Rashford to try and test the opposition with their pace and will rely on Harry Kane for his pace. Harry Kane is also in line to be the skipper for the Three Lions in Russia with Jordan Henderson his deputy or it may very well turn out to be vice versa.

England had a strong World Cup 2018 qualification as they topped UEFA Group F qualifying group with 8 wins out of 10 and remained unbeaten as they drew the other two games. Although we can say that with Scotland, Slovakia, Scotland, Slovenia, Lithuania and Malta as competitors in the group a perfect ten would have been the apt result.

England had a completely forgettable World Cup 2014 with losses in the opening two games against Italy and Uruguay by a margin of 2-1 that ended their World Cup dreams. It also failed to defeat minnows Costa Rica but avoided a third straight loss ending the tournament with a goalless draw.

Harry Kane: He is regarded as one of the best strikers of the World and with him being branded as England's only 100 million pounds evaluated player, the stakes are high for Harry Kane to perform. He had an injury scare recently and has lacked his usual sharpness, but we know what Kane is capable of and looking back at how dismal the English scoring record has been at the past few big tournaments, England needs Harry Kane to stamp his authority on the big stage and bang in goals.

Jordan Henderson: Gareth Southgate has complete trust in this dynamic midfielder as his work rate is electrifying and he covers every blade of grass on the football pitch. He has slowly and steadily made good progress with his club Liverpool and has carried forward the legacy of his former club captain and English legend Steven Gerrard. Jordan Henderson is expected to play each and every minute of England’s campaign in Russia.

England is placed in Group G of FIFA World Cup 2018 along with Tunisia, Panama and Belgium. England will be playing two friendly matches against Nigeria on June 2 and against Costa Rica on June 7. Both games will be held at the Wembley Stadium in London before the team fly off to Russia where they will start the FIFA World Cup 2018 campaign against Tunisia on June 18. The Three Lions will play Panama on June 24 and Belgium on June 28 in the remaining league stage matches.

(The above story first appeared on LatestLY on May 21, 2018 06:07 PM IST. For more news and updates on politics, world, sports, entertainment and lifestyle, log on to our website latestly.com).