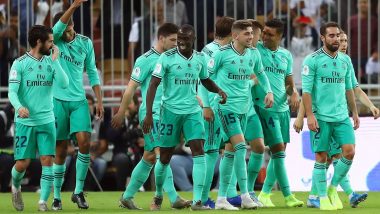 Real Madrid have a chance to go two points clear at the top of the Spanish La Liga table when they play Espanyol in a crunch away tie. Barcelona’s inability to beat Celta Vigo has opened up a golden opportunity for the Los Blancos to steer clear of their arch-rivals. Zinedine Zidane has seen his team will every game since the league restart and the confidence in the camp is significantly high. They will be inching to be out on the field and get the job done. Opponents Espanyol are rock bottom, needing a miracle to survive the drop this season which makes the Los Blancos’ job a bit easy. Espanyol versus Real Madrid will be streamed live on the Facebook page of La Liga from 1:30 AM onwards. ESL vs RM Dream11 Prediction in La Liga 2019–20.

Didac Vila and Sebastian Corchia are the two players unavailable for Espanyol due to injuries while the rest make the cut. 39-year-old goalkeeper Diego Lopez has been around the Spanish League for some time now and he will know what it is like playing against Europe’s elite teams. Bernardo Espinosa and Leandro Cabrera at the heart of defence will need to be resolute with Real Madrid boasting of one of the best attacks in the league. Raul de Tomas leads Espanyol’s forward line in an attacking 4-4-2 formation. Sergio Ramos Should Retire Here at Real Madrid, Says Zinedine Zidane.

Luka Modric and Ferland Mendy are suspended and will not travel with the Real Madrid squad while Lucas Vazquez, Luka Jovic and Nacho Hernandez remain sidelined due to injuries. Karim Benzema has been amongst the goal for the Los Blancos with active support from wingers Eden Hazard and Vinicius Jr. The trio will start tonight along with a midfield three of Casemiro, Toni Kroos and Federico Valverde.

There is no official broadcaster for La Liga 2019-20 in India. Hence, fans will be unable to catch the live action of Espanyol vs Real Madrid on their TV screens.

Where to Get Free Live Streaming of Espanyol vs Real Madrid, La Liga 2019-20 Football Match?

Espanyol vs Real Madrid Match in La Liga 2019-20 can be streamed online on the official Facebook page of La Liga. So fans can tune into La Liga FB page to catch the action live. With just one win in their last ten game against Real Madrid, the writing is on the wall for Espanyol who could surrender meekly tonight.

(The above story first appeared on LatestLY on Jun 28, 2020 04:57 PM IST. For more news and updates on politics, world, sports, entertainment and lifestyle, log on to our website latestly.com).