Infantino, who came to the Bangladeshi capital on a short goodwill trip, was reacting to the recent incidents in European soccer play such as in Sofia during the qualifying match for the European Championship 2020 between Bulgaria and England. 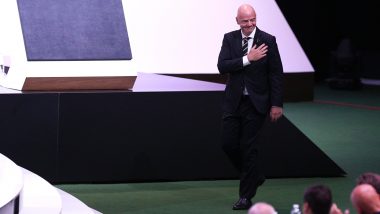 Dhaka, October 18:  FIFA President Gianni Infantino has reaffirmed his organization's commitment to eliminate racism, saying it has no place in football. "We need to send strong messages, that if there are racists that abuse the soccer players we have to stop the game... We cannot let the racists win," Efe news quoted Infantino as saying in a press conference held here on Thursday. "There is no place for racism in society and there is no place for racism in soccer," the 49-year-old Swiss head of the world soccer governing entity said. Paulo Dybala Raises his Voice Against Racism After England Players Were Subjected to Monkey Chants During Euro 2020 Qualifier Match Against Bulgaria.

Infantino, who came to the Bangladeshi capital on a short goodwill trip, was reacting to the recent incidents in European soccer play such as in Sofia during the qualifying match for the European Championship 2020 between Bulgaria and England. The Bulgarian police arrested four soccer fans over racist actions during England's 6-0 win against Bulgaria in Sofia, the country's interior ministry reported Wednesday. Marcus Rashford Praises Bulgarian Captain Ivelin Popov For Asking Fans Not to Hurl Racist Comments During Bulgaria vs England, Euro 2020 (Watch Video).

Bulgaria's Prime Minister Boyko Borissov was among others to condemn the prejudiced and racially charged chants from some fans during his country's loss to England. "We have to speak about it (racism), we have to educate, we have to educate our youths, our children and those who are a bit older as well," Infantino said.

The FIFA President ruled out any concerns the governing organization had of stadiums going empty in the next World Cup in 2022 in Qatar following a recent lack of interest in sporting activities during the Athletics World Championship played in the Persian Gulf country. "The tournament (World Cup) will actually be played in November-December, (November 21 till December 18) which is different compared to the Athletics World Championship, which was organised in September," he pointed out.

Infantino stated that the temperatures in November-December in Qatar were "ideal" for soccer, adding that players would be also at the top of their form in that time period. "It is not like in June and July when they come exhausted from a very long season. "I am sure in Qatar we will witness, from a technical point of view, the very best World Cup ever," he added.

(The above story first appeared on LatestLY on Oct 18, 2019 09:52 AM IST. For more news and updates on politics, world, sports, entertainment and lifestyle, log on to our website latestly.com).