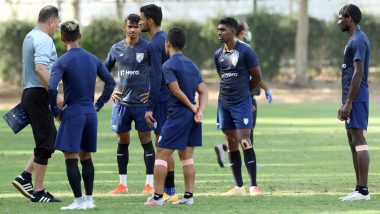 Qatar led 1-0 at half-time, Abdel Aziz Hatim making the difference between the two sides, slotting in a 34th minute winner at the Jassim Bin Hamad Stadium.

The win took Qatar to 19 points, seven ahead of Oman who have two matches in hand and will face Felix Sanchez's side on Monday. India stay on three points from six matches. Lionel Messi Prepares for Argentina vs Chile 2022 FIFA World Cup Qualifiers, Posts Latest Photo on Instagram.

Bangladesh and Afghanistan shared the spoils in a 1-1 draw in the other Group E tie on Thursday.

India's other qualification matches are against Bangladesh on June 7 and Afghanistan on June 15. India are bidding to qualify for the 2023 Asian Cup, though they are out of contention for next year's World Cup.

The last time the two teams met, in September 2019, India had held the Asian champions to a goalless draw.

Qatar played it amongst themselves right from the kick-off in their effort to find spaces through the Indian midfield.

The Blue Tigers did sniff a counter in the seventh minute when Manvir Singh latched on to a loose ball and laid it off for Bipin Singh on the left flank. But the latter's cross found no one.

The first yellow card of the evening was flashed to Rahul Bheke on the eighth minute for a tackle on rival captain Hassal Al Haydos. Ten minutes later, the impact was larger -- Bheke was given marching orders after receiving his second yellow card of the match for a handball offence. The resultant vicious curler from Haydos was punched away by Gurpreet.

With India down to 10 men, Qatar's domination increased. However, India had their first real chance in the 29th minute when Ashique Kuruniyan managed to slip past his marker and essayed it behind the defensive line for an onrushing Manvir. But the striker's touch let him down from what was a clear chance.

Five minutes later, Qatar surged into the lead. Abdelkarim found Almoez Ali inside the box, who turned and laid it off for Abdel Aziz. The jungle of legs didn't allow the latter to have a clear shot on goal, but he being allowed the luxury of that that extra split second, Abdel Aziz managed to send it past Gurpreet.

However, Gurpreet had a good match. His physical presence, those big hands, reflexes and attitude as he fisted, punched, and even used his legs to maximum effect to thwart Qatar.

In the 68th minute, Lalengmawia 'Apuia' Ralte replaced debutant Glan Martins, and then in the 75th minute Akash Misra came in for Bipin Singh.

Qatar had their best chance of the second half with about four minutes of regulation time left on the clock, when substitute Abdullah Alahraq rifled a long-ranger onto the near post. However, the ball ricocheted and went out of play.

Sandesh Jhingan made a one last effort to launch a counter for India in injury time as he charged down the pitch and tried to play Manvir through on goal. But it was futile.

(The above story first appeared on LatestLY on Jun 04, 2021 03:05 PM IST. For more news and updates on politics, world, sports, entertainment and lifestyle, log on to our website latestly.com).