He added that while the COVID-19 pandemic has come in the way of clubs coming forward and fielding their women's teams, there have been positive discussions with them and most teams are inclined to do the same. 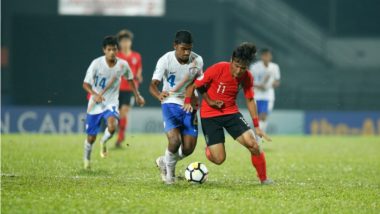 Kolkata, July 27: The All India Football Federation (AIFF) will make it mandatory for clubs to have a women's team as part of the licensing criteria in the next couple of seasons, the sports body's general secretary Kushal Das has said.

Women's football in India has gathered momentum with the country set to host the FIFA U-17 World Cup next year, followed by the AFC Asian Cup in 2022. The fourth edition of the Indian Women's League (IWL) saw 12 teams take part in the final round in Bengaluru.

Das has urged Indian clubs to take women's football more seriously, saying there needs to be more teams in the IWL for the pool to increase. Here’s How Cristiano Ronaldo and Other Juventus Players Celebrated Ninth Serie A Title in a Row (Watch Photos and Videos).

"Unless the clubs understand the significance and invest in women's football, the percentage of change will be slow, and less. If we don't have more teams competing in the IWL, the pipeline won't increase much," Das told IANS in an interview.

"The clubs should realise the importance of focussing on women's football and field a team. Hence, we have put in a clause in our licensing criteria for all clubs to have a women's team. Although at present it is non-mandatory, in a couple of seasons it will become mandatory. We have to give the clubs time to prepare a women's team," said Das.

He added that while the COVID-19 pandemic has come in the way of clubs coming forward and fielding their women's teams, there have been positive discussions with them and most teams are inclined to do the same.

"The current pandemic situation also makes it difficult but we had discussions with clubs, and most of them are inclined to field women's teams.

"I feel the impact of the FIFA U-17 Women's World Cup, and the AFC Women's Asian Cup in 2022 would be big. We are eagerly looking at it and expect it to have a big sociological effect on society and women's football in particular.

"We feel that the legacy of the World Cup will only allow the girls to play more."

Das also said that licensed Indian coaches must be provided with more avenues to show their mettle if they are to come up the ranks and make a mark. Recently, former India coach Stephen Constantine had said that India needs to focus more on a coach education in order to produce better footballing talent.

"There has been a total overhauling of the coach education structure in India recently," Das said.

"We have some very capable Indian coaches – our U-16 national team and the women's national teams are respectively coached by Bibiano (Fernandes) and Maymol (Rocky) with an all-Indian support staff. With Indian instructors now being acknowledged by the AFC, we can conduct the courses ourselves and are not fully dependent on AFC to send us instructors.

"We are also working on a project which unfortunately had to be halted due to the pandemic. We had plans to send about 10-12 Indian coaches like Bibiano Fernandes, Venkatesh Shanmugam to Germany or Netherlands, with whom we have an MoU as part of the coach education.

"Unfortunately, that couldn't happen now but that's part of the plan for the future. We would like to have as many courses as possible but at the same time, we also need to ensure that licensed coaches get properly employed.

"A lot of clubs, academies and teams are coming up, so hopefully they will be engaged and employed.

"I hope -- in five years from now, the senior national team is coached by an Indian coach like it happens in Japan, Korea Republic etc," added the general secretary.

Das further said that India is now a go-to destination for international events. India had successfully hosted the 2017 men's U-17 World Cup.

"One of the most significant changes in recent times is that India is now the go-to destination for big international events. Cristiano Ronaldo Dedicates Serie A 2019–20 Title to Juventus Fans Suffering During Coronavirus Pandemic (See Post).

"It all boils down to the seamless organisational capabilities -- otherwise we wouldn't have secured rights for the FIFA U-17 Women's World Cup. The U-16 AFC Finals and then the U-17 World Cup in 2017 set the ball rolling for us. The 2022 Women's Asian Cup will be big, and we have also expressed our interest for the AFC Asian Cup in 2027," Das concluded.

(The above story first appeared on LatestLY on Jul 27, 2020 02:10 PM IST. For more news and updates on politics, world, sports, entertainment and lifestyle, log on to our website latestly.com).