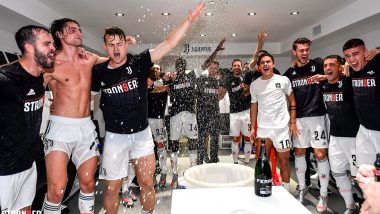 Juventus defeated Sampdoria 2-0 on Sunday at the Allianz Stadium to win their ninth successive Serie A title in a row. This was also Maurizio Sarri’s first-ever domestic league title as a football manager. The Bianconeri’s has endured a tough season but managed to grind out results in the end to win yet another trophy and it wasn’t a surprise that players celebrated wildly after a demanding campaign. Juventus Secure Ninth Straight Serie A Title Following 2–0 Over Sampdoria (Watch Goal Highlights).

With Inter Milan winning their game against Genoa, Juventus needed all three points against Sampdoria and the players obliged, putting up a dominate performance. Cristiano Ronaldo opened the scoring just before the half-time break and Federico Bernardeschi confirmed the title with a strike past the hour mark. Cristiano Ronaldo Dedicates Serie A 2019–20 Title to Juventus Fans Suffering During Coronavirus Pandemic (See Post).

With this title, Juventus clinched the 36th Serie A crown in their history and their run of nine-consecutive domestic league titles is better than any other team in the top five European leagues. Several players like Adrien Rabiot, Aaron Ramsey and Matthijs De Ligt won their first title in Italy and here are how the Biancoenri players celebrated that win.

Celebrations are in Order

With Serie A title secured, the record Italian champions will now be looking forward towards another trophy which has eluded them for so many years, the UEFA Champions League. The Black & Whites will take on Lyon on August 7.

Juventus suffered 1-0 defeat at the Groupama Stadium in February in the Round of 16 first le and will be adamant on overturning that deficit when the French side visits to Turin. The Bianconeri’s last won the prestigious tournament during the 1995-96 season.

(The above story first appeared on LatestLY on Jul 27, 2020 12:57 PM IST. For more news and updates on politics, world, sports, entertainment and lifestyle, log on to our website latestly.com).

Comments
Tags:
Juventus Juventus Players Juventus Serie A Title Juventus vs Sampdoria Maurizio Sarri Serie A Serie A 2019-20
Comments
You might also like