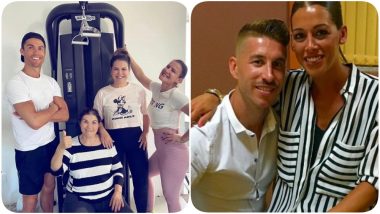 Most of the times it’s the WAGs that walk away with the maximum attention from the footballer’s lives. The WAGs dominate the headlines in most of the cases and very little attention is paid to the members of the family. There are times that the sisters of the footballers appear on one of these Instagram posts or in the family photo, but not many of them are known. From Cristiano Ronaldo’s sisters Elma & Katia Aveiro to Sergio Ramos's younger sister Miriam Ramos, meet gorgeous sisters of these football stars who they totally fall back on for support and love to adore. Cristiano Ronaldo’s Sister Shares Picture of Old House Family Stayed During Struggling Years, Says ‘Was Bitten by Rat’.

Most of the times the two women are spotted on the official a page of Cristiano Ronaldo. They are his elder sisters, Elma and Katia Aveiro. Whether its while partying or spending some time together with family, Ronaldo never forgets to pose with these two girls. Needless to say, they surely qualify in the list.

Feeling very thankful to have my mum home from hospital and recovering. Look after your families and loved ones. #stayhomesavelives

Miriam is the least known face in the family of the football star Sergio Ramos. Not many pictures of her have appeared on social media too cause she isn't very active on these networks. Despite this, Miriam is quite close to the Real Madrid footballer.

Twt @SergioRamos: Today is the Birthday for one of the most important people. Thank you, sister. Love you, Mirita! pic.twitter.com/tlwVh1PHks

Ana Hernandez Balcazar, the younger sibling of Javier Hernandez shares a very special bond with her brother. She has made a number of appearances when Javier was playing for Manchester United.

Arturo Vidal's sister grabs eyeballs for her daring photos on social media. The mother of three has already been categorised as an attractive and sexy sister of Vidal. Check out her snap above.

Neymar falls under the category of the sexist men in football. That easily explains why his sister would also ooze with gorgeousness. The drop-dead gorgeous beauty is quite a thing and never fails to set your heart racing with her photos.

That's all we have on the list. If you think we have missed out any names, feel free to add on with your comments in the space below. Stay tuned to LatestLY, for more updates on all the latest happenings around the world.

(The above story first appeared on LatestLY on Aug 02, 2020 08:10 AM IST. For more news and updates on politics, world, sports, entertainment and lifestyle, log on to our website latestly.com).