The Dutchman has been rumoured to making a move to Old Trafford this season to reunite with former manager Erik ten Hag. According to a latest report, Carlos Soler is being considered by Barcelona as De Jong's replacement, if he ends up leaving. 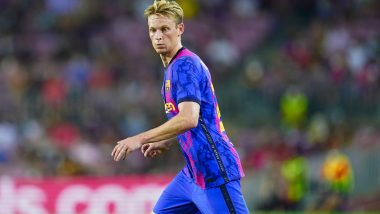 Manchester United have been handed a boost in signing Frenkie De Jong this summer. The Dutch midfielder has been linked with a move to Manchester United for some time now after Erik ten Hag was named new manager of the club. According to a latest report, Barcelona have identified a replacement for De Jong if the Dutch midfielder chooses to leave and join his former manager. Mohamed Salah Transfer News: Egypt Star Confirms Anfield Stay for Next Season

Barcelona have reportedly set their sights on Valencia's Carlos Soler as De Jong's replacement. The Catalan giants might not be willing to let go but is likely to do so with them being financial pressure. Soler too has a year left on his Valencia contract and it would be financially profitable if they decide to sell the player this summer.

According to a report in Spain, Manchester United have given an ultimatum to De Jong, asking him to arrive at a decision soon. The Red Devils would not play Champions League football next season and that might play a role in De Jong' final decision. But Barcelona's financial woes mean that an exit for the Dutchman cannot be ruled out at all. Barcelona have been also been linked to signing Bayern Munich star Robert Lewandowski this summer.

(The above story first appeared on LatestLY on May 27, 2022 04:18 PM IST. For more news and updates on politics, world, sports, entertainment and lifestyle, log on to our website latestly.com).