Full Champions League Highlights Video: Watch This Funny Pokemon-themed Clip That Will Summarise Round of 16 in Less Than Two Minutes

A little creativity doesn’t harm anyone and this video with its superb visualisations is a treat for any football fan. The video is how both the sides are pitted against each other and possess special powers with them. 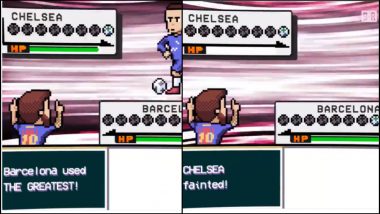 The second leg of Round 16 the Champions League 2017-18 ended, with Barcelona defeating Chelsea at Camp Nou. Lionel Messi led the charge as he scored a brace in their 3-0 win in the second leg on March 15. The draws for the quarter-finals will take place at UEFA’s headquarters in Nyon, Switzerland, on March 16. A lot of fan-frenzy was seen on social media as fans across the globe celebrated their football’s club qualification for the quarter-finals.

There were a lot of memes, funny messages, picture messages going viral on social media as the Round of 16 officially came to an end. However, we stumbled upon this video, and the creativity displayed in it is to a whole new level!

With all the competitions that took place in the Champions League’s Round of 16, this Twitter account made a clip based on the theme of a Pokémon video game. The video shows how the eight teams that qualified – Real Madrid, Liverpool, Juventus, Manchester City, Sevilla, AS Roma, Barcelona, and Bayern Munich – defeat their rivals – Paris Saint-Germain (PSG), Porto, Tottenham Hotspur, Basel, Manchester United, Shakhtar Donetsk, Chelsea, and Besiktas – in the football league.

A little creativity doesn’t harm anyone and this video with its superb visualisations is a treat for any football fan. The video is how both the sides are pitted against each other and possess special powers with them. How the football club use their attack, defence, and special powers are what all this funny, yet sporty video all about. Twitterati was all praise for it and their reactions were simply hilarious!

We bring to you some of the most amazing reactions of the people on micro-blogging site Twitter, which were made in the context of this video.

As both a Chelsea fan and an ex-Pokémon fan, I have to say... I’m torn https://t.co/vfKkrxzI2z

3. The video is indeed GOLD.

This is absolute gold pic.twitter.com/8argDpCQ34

4. How about a Pokemon and Advance Boy collaboration?

Is it that Pokemon game played with Advance Boy? 😂

5. This was our favourite thing on the Internet, too!

My favourite thing on the internet today! @tommo32000

6. What did Manchester United use?

7. Lionel Messi, Goat or Greatest of all time?

I like how they used the 🐐 to describe Messi https://t.co/IuQsGBjiKt

With the quarter-finals draws set to take place in less than 24 hours from now, it will be interesting to see how the schedule shapes up. The rules followed in the last-16 draw will not be applicable this time, as there will be no seedings and teams from the same country can play each other.

(The above story first appeared on LatestLY on Mar 15, 2018 09:06 PM IST. For more news and updates on politics, world, sports, entertainment and lifestyle, log on to our website latestly.com).