Harry Kane Might Skip Tottenham Hotspur Training To Force a Move Away From the Club Ahead of 2021–22 Season: Reports

Kane had earlier made public his desire to win trophies and challenge for league titles, something he didn't achieve in his Tottenham career so far. He has been heavily linked with a move to Manchester City 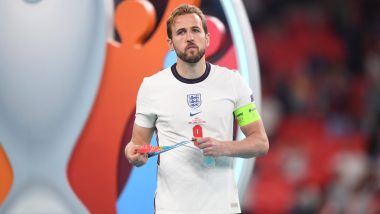 England striker Harry Kane reportedly might not join his Tottenham Hotspur teammates in training in order to force a move away from the club. The possibility of Kane leaving the London club grew when he publicly stated that he wanted to win championships and trophies in his career. Reports have claimed that he is pushing for a move to Premier League champions Manchester City, who have a vacant striker spot, after Sergio Aguero left for Barcelona earlier in the summer window. But Kane's move away from Spurs might not be as easy as it looks with the player already having three years left on his Tottenham contract and the club holds the keys if the England captain finally ends up leaving London. Harry Kane Hails England Fans After Three Lions Defeat Denmark in the Euro 2020 Semi-Final Match (See Pic)

Kane also has attracted a lot of interest, notably from Manchester City and is currently on a holiday after England's Euro 2020 campaign where they lost to Italy in the final. New Tottenham boss Nuno Espirito Santo however has claimed that he wouldn't be sold this summer, stating that 'Kane is our player". Kane has been an integral part and one of the best players for Spurs for a long time now, with over 200 goals in 334 appearances for the London outfit so far. Unfortunately despite leading from the front and being regarded as one of Europe's best strikers, Kane has been unable to win any trophy with Spurs so far.

However with the appointment of Jose Mourinho as manager, Spurs had expected that their silverware drought would come to an end and their star man would also be happy to stay at the club. But Mourinho was fired midway last season just before Spurs played the League cup final and it is now highly uncertain whether Kane would stay put with Spurs or move to a different club. It remains to be seen whether Tottenham would respect Kane's ambitions and let him go or stick to their committment of not letting one of their best players leave this summer.

(The above story first appeared on LatestLY on Jul 17, 2021 03:10 PM IST. For more news and updates on politics, world, sports, entertainment and lifestyle, log on to our website latestly.com).