Hellas Verona vs Juventus match in Serie A 2020-21 will take place on February 28, 2021 (late Saturday night). The match will be played at the Marcantonio Bentegodi Stadium and it is scheduled to begin at 1:15 am IST (Indian Standard Time). 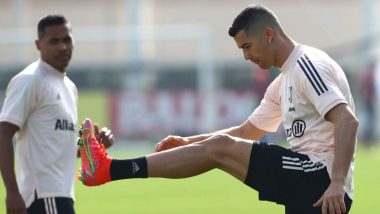 Juventus will be looking to edge closer to Inter Milan in the Italian Serie A when they take on Hellas Verona in the Serie A. The Bianconeri currently trail the league’s top side by eight points and with a third of the season left, the defending champions are in danger of missing the title for the first time in many years. Andrea Pirlo’s first season in charge has not been short of drama with Juventus winning a trophy but performing poorly in the league and trailing in their round of sixteen tie against FC Porto. Opponent Hellas Verona are in the top half of the table enjoying a descent ninth place in the league. They are undefeated in the last two games and will be confident of taking on Juventus. Cristiano Ronaldo Transfer News Update: Portuguese Star Tipped To Leave Juventus in the Summer.

Hellas Verona will be without the services of key players in Nikola Kalinic, Ebrima Colley, Marco Benassi, Eddie Salcedo, Federico Ceccherini and Pawel Dawidowicz who are suffering with fitness issues. Davide Faraoni and Adrian Tameze will undergo late fitness test to determine their availability for the game. Antonin Barak and Kevin Lasagna will be the main men upfront for the hosts with the midfield not expected to dominate possession.

Paulo Dybala, Giorgio Chiellini, Leonardo Bonucci, Arthur and Juan Cuadrado are unavailable for the visitors as they are recuperating from injuries. Cristiano Ronaldo and Dejan Kulusevski will lead the attack with Rodrigo Bentancur and Aaron Ramsey in midfield. Matthijs de Light and Meh Demiral in defence have looked susceptible at the backline and they need to be on top of their game if Juventus are to claim all three points.

When is Hellas Verona vs Juventus, Serie A 2020-21 Football Match? Know Date, Time and Venue

Hellas Verona vs Juventus match in Serie A 2020-21 will take place on February 28, 2021 (late Saturday night). The match will be played at the Marcantonio Bentegodi Stadium and it is scheduled to begin at 1:15 am IST (Indian Standard Time).

Where to Watch Live Telecast of Hellas Verona vs Juventus, Serie A 2020-21 Football Match?

Fans in India can catch the live telecast of Hellas Verona vs Juventus match on Sony Sports channels. Sony Sports Network is the official broadcasters of Serie A 2020-21in India. So fans can tune into Sony Ten 2 and Sony Ten 2HD channels to catch the live-action of clash.

How to Get Free Live Streaming Online of Hellas Verona vs Juventus, Serie A 2020-21 Football Match?

Those fans unable to watch the game live on television can follow the game online. SonyLiv, the official streaming partner of Sony Sports Network, will be live streaming the Hellas Verona vs Juventus match. So fans can tune into SonyLiv App or website to catch the live action of Serie A 2020-21 matches. Hellas Verona will feel they have a chance in the game considering Juventus have lost two of their last three games. A tough match for both these clubs but one the visitors should clinch at the end.

(The above story first appeared on LatestLY on Feb 27, 2021 01:05 PM IST. For more news and updates on politics, world, sports, entertainment and lifestyle, log on to our website latestly.com).