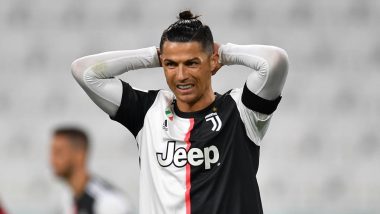 Cristiano has been linked with a move away from Juventus, three years after moving to the Turin club on a record transfer. The five-time Ballon d’Or winner has been one of the best performers for the Italian giants since his arrival but is now considering his future as the Bianconeri are on course to end the season without winning the domestic league title for the first time in a decade. Cristiano Ronaldo Shares Lovely Photo With Girlfriend Georgina Rodriguez and His Four Kids, Juventus Star Spends Quality Time With Family.

According to Tuttojuve, Cristiano Ronaldo is tipped to leave Juventus at the end of the current season by the bookmakers. The odds for the striker’s departure is set at 1.65. On the other hand, the 36-year-old’s odds for remaining at the club is at 2.10.

Cristiano Ronaldo is the leading scorer for Juventus this season and since his arrival has scored the majority of goals for the record Italian champions. Bianconeri signed the former Real Madrid star to win the Champions League but the club have failed to make it past the quarter-final stage since his arrival.

Cristiano Ronaldo will have a season left of his contract with Juventus after the end of the current campaign but could say his farewell to the club earlier than expected. Bianconeri risk not winning the league title for the first time in ten years as they currently find themselves eight points behind leaders Inter Milan in the table.

According to recent reports, the five-time Ballon d’Or winner has come under immense criticism for his inconsistent performances this season due to which the 36-year-old has asked his agent Jorge Mendes to search for a new club.

The Portuguese star is enjoying a decent season so far as the 36-year-old is the leading scorer in Serie A this season. The forwards has scored 25 goals in 28 appearances for Juventus this campaign in all competitions despite missing a number of games through positive COVID-19 diagnosis.

(The above story first appeared on LatestLY on Feb 26, 2021 08:20 PM IST. For more news and updates on politics, world, sports, entertainment and lifestyle, log on to our website latestly.com).