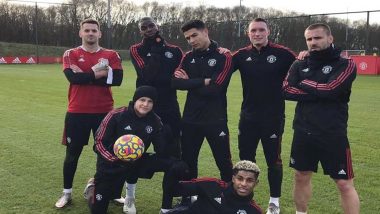 Cristiano Ronaldo has returned to training sessions after recovering from his hip injury. Ahead of the EPL 2021-22 match against Brentford, Ronaldo was seen sweating it out on the grounds. After the match, CR7 took to social media and posted a picture of himself with Marcus Rashford, Paul Pogba, Donny van de Beek, Luke Shaw, Phil Jones and Tom Heaton. The photo was captioned, "The winners are." Now surely the three players from Manchester United Nemanja Matic, Jadon Sancho and Amad Diallo took to social media and took a hilarious jibe at Ronaldo. Cristiano Ronaldo Reacts After Winning The Best FIFA Special Award 2021, Writes, ‘Now It’s Up to Me To Turn This Into Extra Fuel and Motivation’ (Check Post).

While Jadon Sancho joked that Ronaldo won the first game in a while, Diallo claimed that the picture was taken without him in the frame. While the 33-year-old Nemanja Matic claimed that Ronaldo won only because he was not playing. The comments from these players went viral on social media. Manchester United will take on Brentford on January 20, 2022. The match will have a start time of 01.30 am IST. Now, check Ronaldo's winning post and all the comments below.

Manchester United is currently placed on number seven of the EPL 2021-22 points table. The team now has 32 points in their kitty and has so far won nine games and faced six losses. Their remaining matches ended with a draw.

(The above story first appeared on LatestLY on Jan 19, 2022 04:02 PM IST. For more news and updates on politics, world, sports, entertainment and lifestyle, log on to our website latestly.com).