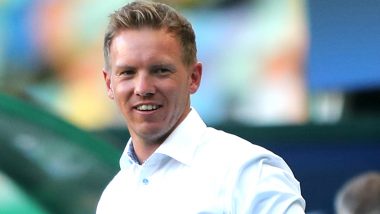 RB Leipzig continue their dream run in UEFA Champions League as they defeated Atletico Madrid to book a place in the semi-finals against French giants Paris Saint Germain. This is the first time that the German team has reached the final four of the competition and in doing so also became the first side without Cristiano Ronaldo to eliminate Diego Simeone’s Atletico from UCL knockout stage. ATL 1–2 LEP, UEFA Champions League 2019–20 Goal Video Highlights: RB Leipzig Stun Atletico Madrid to Reach Maiden UCL Semi-Finals.

Tyler Adams scored the winner in the final minutes of the game as his low shot deflected off Stefan Savic into the goal, giving Jan Oblak no chance. The Bundesliga side had initially taken the lead in the 51st minute thanks to a well-guided header from Spaniard Dani Olmo but a below-par Atletico managed to get themselves on level terms courtesy of Joao Felix’s penalty. Robert Lewandowski a Great Player But Lionel Messi is From Another Planet, Says Quique Setien.

This is the first time Diego Simeone's men have been knocked out of the Champions League knockout stage by a team that did not have Cristiano Ronaldo in their ranks. Last season it was Juventus who overturned a 2-0 deficit from the first leg against the Spaniards on the back of the five-time Ballon d’Or winner’s hat-trick and before that, it was Real Madrid, who have beaten their city rivals twice in the competition's final.

But on Thursday, Julian Nagelsmann’s team defied all the odds when they managed to defeat Atletico and reach the semi-finals and in doing so the 33-year-old manager became the youngest coach to make it into the final four of Champions League. The Germans team will take on Thomas Tuchel-led PSG.

It was Thomas Tuchel who paved the way for Nagelsmann into coaching after the Germans footballing career ended at an age of 20 due to a knee injury. The current Leipzig coach started his coaching career with FC Augsburg’s reserve team in 2007/08 and he was appointed in that position by the present PSG boss.

(The above story first appeared on LatestLY on Aug 14, 2020 12:47 PM IST. For more news and updates on politics, world, sports, entertainment and lifestyle, log on to our website latestly.com).