Robert Lewandowski a Great Player But Lionel Messi is From Another Planet, Says Quique Setien 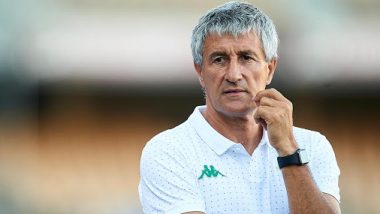 Lisbon, Aug 14: FC Barcelona coach Quique Setien has compared Lionel Messi to Bayern Munich forward Robert Lewandowski and he insisted that the Pole "is not at the level of Leo".

On Friday, Barcelona will face Bayern in the Champions League quarterfinal in Lisbon. The match is announced as an encounter between Messi and Lewandowski, who leads the top scorer classification with 13 goals.

However, Setien told the pre-match press conference on Thursday that the Argentinian is a better player, reports Xinhua news agency.

"Lewandowski is an extraordinary and dangerous scorer. He is a great player but I think he is not at the level of Leo, as Messi is from another planet," he said.

"Lewandowski has scored 13 goals in the Champions League and he's well assisted by a lot of teammates around him. But Leo's in a great moment too as he showed it against SSC Napoli," he added.

Setien emphasised that teamwork will be a key to beat Bayern. "Messi can help you win for sure, but I've always believed in the strength of the team."

"We know the strength of the rival and I won't underestimate it. Bayern players are dangerous in attack, and they also defend well," concluded the Spaniard.

(The above story first appeared on LatestLY on Aug 14, 2020 10:10 AM IST. For more news and updates on politics, world, sports, entertainment and lifestyle, log on to our website latestly.com).