Felix made an instant impact after replacing Hector Herrera, earned the penalty and scored it to draw level the scores and breathe fire into a lacklustre Atletico side. He looked likely to score again and was dangerous but Atletico were left ruing the poor form of other players as Adams found the net after a big deflection to snatch the winner. 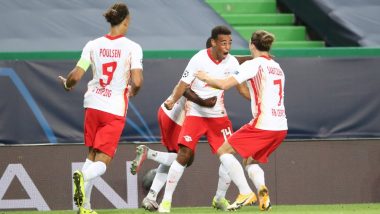 RB Leipzig stunned Atletico Madrid with a 2-1 win in the UEFA Champions League 2019-20 quarter-final to reach the semi-final for the first time in the club’s history. Dani Olmo had given RB Leipzig the lead at the start of the second half but substitute Joao Felix converted a penalty to level the scores before American international Tyler Adams came off the bench to score the winner two minutes before the end of regulation time. RB Leipzig dominated the game with their slick passing with Atletico only breathing life after record signing Felix came on as a substitute in the final half-hour. Juventus Transfer News Update: Major League Soccer Club Inter Miami Signs French Midfielder Blaise Matuidi.

Felix made an instant impact after replacing Hector Herrera in the second half. He earned the penalty and scored it to draw level the scores and breathe fire into a lacklustre Atletico side. He looked likely to score again and was dangerous but Atletico were left ruing the poor form of other players as Adams found the net in the 88th minute after a big deflection to snatch the winner and sent Atletico packing.

The German side, founded only 11 years ago, will now face Paris Saint-Germain in the semi-final next Wednesday. Leipzig started early and started well and should have really gone ahead when Marcel Halstenberg found himself with a clear chance to score from inside the Atleti box. But his volley flew into the stands and the La Liga side responded with a shot from Yannick Carrasco on the near post after some lovely play between him and Renan Lodi. But Leipzig goalkeeper Peter Gulasci was up to the task.

Leipzig were clearly missing Timo Werner up front and failed to break down a defensively strong Atletico side with their only shot on target in the first half coming from a Dayot Upamecano header, which was straight at Jan Oblak. Upamecano though was brilliant at the other end and kept Diego Costa at bay with a superb performance. Julian Nagelsmann’s side finally found the breakthrough in the 51st minute when Dani Olmo headed in Marcel Sabitzer’s cross from the right to put Leipzig ahead.

Atletico Madrid coach Diego Simeone immediately responded by bringing on Felix and the 20-year-old Portuguese, back at his home-country, dribbled his way into the penalty box to earn the penalty from which he levelled the scores. But Leipzig will eventually have the final laugh when Adam’s shot, just two minutes from regulation time, took a big deflection off centre-back Stefan Savic and beat a wrong-footed Obalk for the winner.

(The above story first appeared on LatestLY on Aug 14, 2020 09:23 AM IST. For more news and updates on politics, world, sports, entertainment and lifestyle, log on to our website latestly.com).