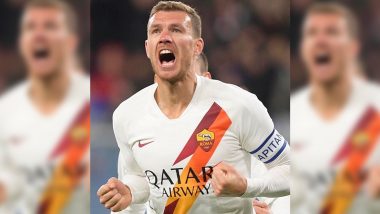 Juventus appointed Andrea Pirlo as their new manager following the sacking of Maurizio Sarri after their early Champions League exit at the hands of Lyon. Ever since the 41-year-old’s appointment, he has urged the Bianconeri to sign a new striker to support Cristiano Ronaldo upfront. The Italian side have been linked with several forwards in recent weeks and might finally be getting their man in the coming weeks. Cristiano Ronaldo Fires Warning to Opponents Ahead of Serie A 2020-21, Scores a Goal During Juventus vs Novara, Friendly Game (Watch Video).

Juventus are in the transfer market for a new striker as the club are set to let Gonzalo Higuain leave in the summer. The 32-year-old forward returned to Turin last year after a short loan spell with Chelsea and is reported to join David Beckham’s Inter Miami. Blaise Matuidi also moved from Juventus to the MLS club in the summer. Luis Suarez to Play Alongside Cristiano Ronaldo? Barcelona Striker Contacts Juventus Chief Over Possible Transfer.

According to Fabrizio Romano, Edin Dzeko is set to join Juventus as AS Roma have found a replacement for the Bosnian striker. The Italian capital club have reached an agreement with Napoli to sign Arkadiusz Milik for a transfer fee of €25m which also include the add-ons. If the transfer goes through, Dzeko will switch sides and join the record champions, who have always considered the 34-year-old as their top priority.

AS Roma have reached an agreement with Napoli to sign Arkadiusz Milik [€25m add ons included]. Now it’s up to the player: if Milik will accept to join Roma, Edin Dzeko will be sold to Juventus. Dzeko has always been the #1 choice as Juve striker 🚨 @DiMarzio @SkySport #transfers

Andrea Pirlo has been adamant on signing a striker to partner up with Cristiano Ronaldo despite the Portuguese scoring a number of goals. The newly appointed manager wants to play with formation consisting of two forwards with Paulo Dybala in the number 10 position.

The Italian club are also linked with Barcelona striker Luis Suarez, who is in a contract dispute with the Catalans. But the deal looks complicated as the Uruguayan and Barcelona haven’t yet reached an agreement on a particular fee for the striker to terminate his final year contract with the club.

(The above story first appeared on LatestLY on Sep 15, 2020 01:28 PM IST. For more news and updates on politics, world, sports, entertainment and lifestyle, log on to our website latestly.com).