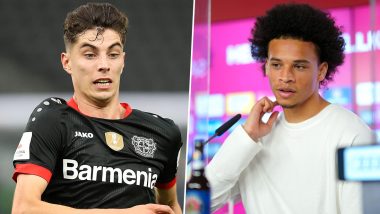 Kai Havertz has had a brilliant season which has got several European heavyweights interested in acquiring his services from next season onwards. However, the club tipped to sign the German prodigy are Premier League side, Chelsea.  And it looks like the move is very much sealed as new Bayern Munich signing, Leroy Sane might have dropped a huge hint regarding the while talking to the media. Kai Havertz Transfer News Update: Bayer Leverkusen Star Wants Chelsea Move.

It was earlier reported by BILD, that the 21-year-old forward will request his current team Bayer Leverkusen to let him sign for Chelsea when the Bundesliga side returns to training this week. And in a recent press conference, Leroy Sane all but confirmed that Kai Havertz would be sealing a move to Chelsea. Jan Oblak Transfer News Latest Update: Chelsea Told to Pay Slovenian Goalkeeper’s €120m Buy-Out Clause by Atletico Madrid.

While in conversation with the reports, Leroy Sane discussed about the quality of the young talents that are currently coming through from Germany at the moment, saying that Chelsea have done well to sign two of them in Timo Werner and Kai Havertz.

German is my first language, so believe me when I tell you those quotes are essentially correct.

Word for word translation would be along the lines of: “With Timo Werner & Kai Havertz, 2 Germans in 1 year, I think Chelsea might‘ve done well to get a hold of (them).“#Sane #CFC https://t.co/nhJ8podwie

According to certain reports, Kai Havertz has already agreed personal terms with Chelsea and his contract with the Blues until 2025 is already ready. However, the issue still remains about the player’s transfer fee. Bayer Leverkusen want around €80/90 million for their superstar and Chelsea are set to begin negotiations with the German side.

Chelsea have been very much active in the transfer window as they have already signed Timo Werner from RB Leipzig and Hakim Ziyech from Ajax. Adding Havertz will give the Blues’ forward line more threat as the German is versatile and can play in several positions both in midfield and attack.

(The above story first appeared on LatestLY on Jul 23, 2020 08:53 PM IST. For more news and updates on politics, world, sports, entertainment and lifestyle, log on to our website latestly.com).