Karim Benzema Lashes Out at Lionel Messi’s Critics, Says, ‘He Who Criticises Messi Knows Nothing About Football’

The Real Madrid forward rushed to the aid of his old rival, who has been at the receiving end of a lot of criticism for failing to recreate his magic for PSG. "It is just a period of adaptation, because he is not scoring a lot of goals. But watch what he does on the pitch," Benzema said. 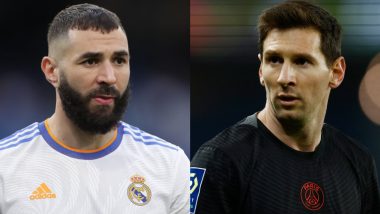 Karim Benzema has come out in support of Lionel Messi, saying that those who criticise the Argentine, 'know nothing about football.' Messi hasn't been able to replicate his magic at PSG ever since he switched clubs in the summer transfer window but Benzema has rushed to his old rival's aid and said that the former Barcelona star is currently in a period of adaptation. "How won’t he succeed? It is just a period of adaptation, because he is not scoring a lot of goals," Benzema said, as quoted by TF1. But watch what he does on the pitch. PSG vs Reims Result and Goal Highlights: Sergio Ramos Scores As Parisians Clinch 4–0 Win at Home

"But watch what he does on the pitch. In any case, you cannot criticise a player like that, he who criticises Messi, knows nothing about football in fact!" the Real Madrid striker added. Benzema was Messi's rival when the latter was in La Liga plying his trade for Barcelona. The seven-time Ballon d'Or winner has been under a lot of criticism for failing to recreate his good form. Messi has scored just one goal in Ligue 1 so far but has found the back of the net five times in the Champions League this season.

Interestingly, Messi and Benzema would be seen going up against each other in what promises to be an exciting contest in the Champions League round of 16 on February 16. This time, Messi would be in a PSG shirt but would once again be in action against Real Madrid, for the first time since leaving Barcelona. The Argentine has had many memorable performances against Real Madrid and he and the whole of Paris would hope that the star forward comes up with a special show.

(The above story first appeared on LatestLY on Jan 24, 2022 11:06 AM IST. For more news and updates on politics, world, sports, entertainment and lifestyle, log on to our website latestly.com).