Kerala Blasters are yet to win a match in this season of the Indian Super League as they have played out two draws and one loss in three fixtures. Odisha FC on the other hand, have won both the matches that they played so far. 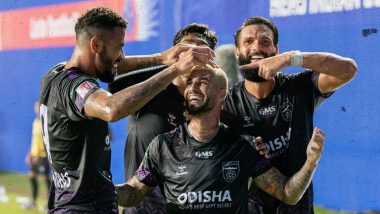 Kerala Blasters would take on Odisha FC in an Indian Super League 2021-22 match at the Tilak Maidan Stadium on Sunday, December 5. The match would begin at 7:30 pm IST (Indian Standard Time). Kerala Blasters have failed to make any sort of impact so far in this season as they have not won a single game. Three matches have only yielded two draws and one defeat and the Blasters, unfortunately, might just be staring at another forgettable campaign. They are going to take on a side who too did not fare too well last season but somehow, have managed to turn the table big time this year. Odisha FC are in red-hot form this season, winning both matches that they have played, scoring nine goals and conceding four in the process. One of the catalysts of their changed form has been Javi Hernandez, who arrived from ATK Mohun Bagan. Indian Super League Points Table 2021–22 Updated

The Spaniard has been involved in both scoring and assisting goals as Odisha FC find themselves placed third on the table with six points. Blasters would be in search of their first win of this season while Odisha would aim at carrying on the good work so far.

The Kerala Blasters FC vs Odisha FC match in ISL 2021-22 will be played at the Tilak Maidan Stadium in Vasco Da Gama. The match will take place on December 05, 2021 (Sunday) and it is scheduled to begin at 07:30 pm IST (Indian Standard Time).

Fans can also watch Kerala Blasters FC vs Odisha FC match online. Since Star Sports network is the official broadcaster of ISL 2021-22, Disney+Hotstar will be live streaming the KBFC vs MCFC clash online for fans. JIO and Airtel subscribers can also follow the match on JIO TV and XStream.

(The above story first appeared on LatestLY on Dec 05, 2021 03:53 PM IST. For more news and updates on politics, world, sports, entertainment and lifestyle, log on to our website latestly.com).