PSG fans did not forget their team's debacle against Real Madrid in the Champions League and their anger was on full display as they booed Lionel Messi and Neymar every time they had the ball during their team's 3-0 win over Bordeaux. PSG beat Bordeaux 3-0 and consolidated their lead at the top of the Ligue 1 2021-22 points table. 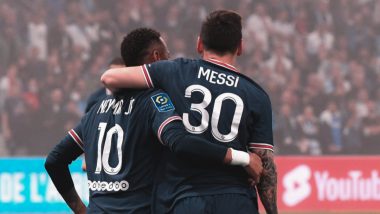 It's evident now that PSG fans would not forget their team's defeat to Real Madrid soon as they kept on booing Lionel Messi and Neymar during the Ligue 1 2021-22 match against Bordeaux. PSG did emerge winners but the home fans weren't in a mood to cheer for Messi and Neymar. The duo, who were part of the PSG playing XI that lost to Real Madrid, failed to find themselves on the scoresheet as despite having a 2-0 advantage at one point of time, Mauricio Pochettino's team conceded three second-half goals to have themselves knocked out of the Champions League. PSG 3–0 Bordeaux, Ligue 1 2021–22 Video Highlights

Against Bordeaux, Kylian Mbappe continued his good form as he scored the opener in the 24th minute. On the other hand. PSG fans jeered Messi and Neymar whenever they had the ball during the game. Although Neymar scored, he still could not draw the appreciation of the home fans, who continued booing the Brazilian.

Check These Videos Out:

Neymar and Lionel Messi are being booed at the Parc des Princes every time they touch the ball during PSG's game with Bordeaux. pic.twitter.com/JXhCcm5Dnn

Lionel Messi and Neymar getting boos from supporters, finished 😭 pic.twitter.com/RNHR7ZpQ6w

Karim Benzema's hattrick blew PSG away from the Champions League who had held a 2-0 lead at one point in the tie. The French giants were expected to compete harder for the Champions League trophy this season, especially after having a very good transfer window last summer.

Rumours have emerged that the PSG hierarchy are not happy with Neymar and want him out of the club. There's a lot of uncertainty over Kylian Mbappe's contract at PSG with many reports claiming that the Frenchman would not pen a new deal as he looks set to head over to Santiago Bernabeu to join Real Madrid.

(The above story first appeared on LatestLY on Mar 14, 2022 09:12 AM IST. For more news and updates on politics, world, sports, entertainment and lifestyle, log on to our website latestly.com).