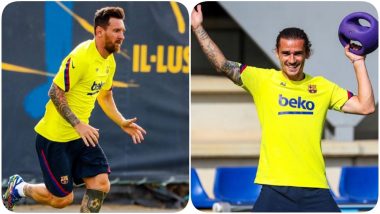 After losing the La Liga 2019-20 to Real Madrid, the players of Barcelona are looking forward to the Champions League 2019-20 which is about to start from August 8, 2020. Players like Lionel Messi, Antoine Greizmann and others were seen sweating at the stadium. The team will play against Napoli in the Champions League 2019-20. The pictures of the team sweating it out were shared on social media by Catalan Giants. The match will be played on August 9, 2020, at the Camp Nou in the Round of 16. The fans are eager to watch the teams in action. Lionel Messi, Wife Antonela Roccuzzo Flaunt Stunning Tanned Bodies While Holidaying in Ibiza, Luis Suarez and Wife Sofia Balbi Also Present (See Pics).

Barcelona has 14 players available for the match against Napoli which includes names like Lionel Messi. The first leg of the tournament had the two teams ending the match with the scoreline of 1-1. The team has shared the pictures of the team sweating it out. Check out the pictures below:

Ahead of the match, the rising cases of COVID 19 in Spain have been a matter of concern for Napoli as the President has urged the UEFA to move the game to some other place. N Napoli president Aurelio De Laurentiis said, "I hear a lot of perplexity and fear coming from Spain and they're acting like nothing is wrong."What does it take to say, 'Don't go to Barcelona but rather go to Portugal, Germany or Geneva?,'" said  De Laurentiis.

(The above story first appeared on LatestLY on Jul 30, 2020 10:00 PM IST. For more news and updates on politics, world, sports, entertainment and lifestyle, log on to our website latestly.com).