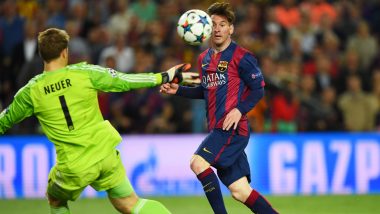 The greatest footballer of his generation and arguably the best player of all time, Lionel Messi celebrates his 33rd birthday today (June 24, 2020). Born in Rosario, Argentina, the magician joined Barcelona at the age of 13 when the first team director at that time, Charly Rexach famously offered the young kid a contract on a paper napkin. And after nearly two decades with the club, Messi has become a deity for the Blaugrana faithful. Reminiscing Argentine Magician’s 2010s At Barcelona.

Apart from Johan Cruyff, Lionel Messi is the most important figure in FC Barcelona’s history and their rise to the very top of modern football. Since his debut in 2004, the Catalan’s dominance in the game has coincided with Lionel Messi’s goal-scoring prowess as the Argentine has always been the focal point in attack for the Catalan club. Lionel Messi in Premier League? Here’s Why the Barcelona Star Will Be A Force to Reckon With in EPL As Well.

Despite playing at different attacking positions throughout his career, Lionel Messi’s goal-scoring records are otherworldly. The Argentine is the all-time leading scorer in La Liga and also holds the record of most goals in a single season and a calendar year for a European club. The magician is a six-time golden boot winner, which is more than anyone else in football history. So on his birthday, we take a look at some of his best goal.

This might be the greatest solo goal Lionel Messi has ever scored. Just at the age of 19, the Argentine dribbled past the entire Getafe defence to score one of the greatest goals of all-time. This goal has been compared by many to Diego Maradona's goal of the century.

Yet another solo goal from the Argentine genius and this time in the finals of the Copa del Rey. Messi received the ball near the halfway line and went on a crazy run, beating four Bilbao players and the goalkeeper in the process to score a goal which still needs explaining.

The biggest club game in world football and Lionel Messi comes up with something out of this world. Against Barcelona's arch-rivals, the Argentine just might have produced the greatest solo goal in UCL history. Messi went past four Madrid player's with ease before slotting the ball past a helpless Iker Casillas.

One of the biggest rivalries on the international stage and Lionel Messi steals the headlines with a masterclass. With the game level at 3-3 in the final minutes, the Argentine produces a brilliant solo goal to complete his hat-trick and win the game for his team.

This goal is remembered by many because of the skill produced by Messi which left Jerome Boateng on his backside as the Argentine went on to chip Manuel Neuer to score one of the greatest goals of all-time. It was a crucial goal as it helped Barcelona to defeat Pep Guardiola's Bayern Munich.

With most of the goal-scoring records already to his name, the Argentine genius is now chasing Pele's record of most goals for a single club. Lionel Messi has scored a total of 629 goals for Barcelona and is just 14 behind the Brazilain legend's tally of 643 for Santos.

(The above story first appeared on LatestLY on Jun 24, 2020 07:30 AM IST. For more news and updates on politics, world, sports, entertainment and lifestyle, log on to our website latestly.com).