A club statement from PSG stated that the Argentine star is still recovering from COVID-19 and would join the team next week. Messi tested positive for COVID-19 while on a Christmas holiday. PSG also would miss Neymar, who is continuing his recovery from an ankle injury. 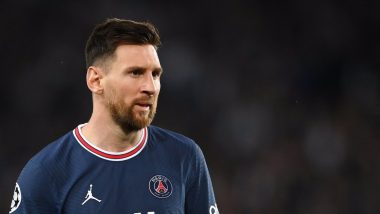 Argentine star Lionel Messi would miss Paris Saint-Germain's upcoming Ligue 1 2021-22 fixture against Brest on Sunday, January 16. Messi, who had contracted COVID-19, is still recovering but a statement from PSG ensured the seven-time Ballon d'Or winner is making good progress and would soon join the squad. "Lionel Messi, whose development is good, continues his work with the medical and performance staff and will gradually return to the group next week," a statement from PSG stated. Messi's recovery from COVID-19 is taking longer than expected. Lionel Messi 'Almost Recovers' From COVID-19, Thanks Fans for Wishes & Support

Messi hasn't had a great domestic season so far, scoring just once in Ligue 1 and has barely been a shadow of himself after switching clubs last summer in a sensational move from Barcelona. The Argentine is yet to recreate his magic on the field in France and PSG would be keen on having him back in the mix of things as soon as possible. But they would not rush him back into the squad as of now and would do so only after he has been declared fully fit. Although Messi is in Paris and has begun training, it remains to be seen when he is cleared to participate in a competitive game. Despite poor form in Ligue 1, Messi has done decently in Champions League, scoring five times.

PSG also would miss Neymar, who is continuing his recovery from an ankle injury. In the absence of Neymar and Messi, Kylian Mbappe would once again grab the spotlight in attack. PSG are comfortably seated at the top of the Ligue 1 2021-22 points table with 47 points, 11 more than second-placed Nice.

(The above story first appeared on LatestLY on Jan 14, 2022 10:52 PM IST. For more news and updates on politics, world, sports, entertainment and lifestyle, log on to our website latestly.com).