Diego Maradona is considered as a deity in the Campanian capital to this day and the people sporting the Sky Blue still hold the former Argentina captain in the highest of regards. Barcelona will face Napoli in the Round of 16 of the Champions League on Tuesday and it will be Lionel Messi’s first visit to Naples for a competitive match. 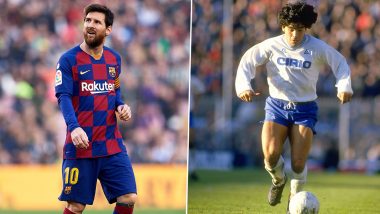 ‘Lionel Messi has arrived in the city of Diego Maradona.’ After more than 15 years as a professional footballer, the Barcelona captain will finally play a Champions League game at the Stadio San Paolo stadium in Napoli. Messi is often compared with his Argentine predecessor Diego Maradona and Napoli was the club with whom the former World Cup winner made a huge impact in Europe, helping them to their first-ever league title. And now the current Argentina ‘number 10’ is all set to play his first game in Naples for this historic clash. Vintage Diego Maradona Video Goes Viral, Shows Argentine Genius Dribbling Past Four Opponents in a Charity Game at Napoli.

Diego Maradona is considered as a deity in the Campanian capital and to this day people sporting the sky blue of Napoli hold the former Argentina captain in the highest of regards. Barcelona will face the Italian giants in Round of 16 of the Champions League on Tuesday and it will be Lionel Messi’s first visit to Naples for a competitive match. Lionel Messi Scores Four Goals Against Eibar, Club Sends Classy Message to Argentine After Heavy Defeat.

Messi Has Arrived in Naples

Napoli had enjoyed some silverware prior to the arrival of Maradona, but it was only after the Argentine joined from Barcelona in 1984, that the club from Naples lifted their first Serie A crown in 1987 and then again in 1990, also winning the UEFA Super Cup in 1989. It was also during Maradona’s time at Napoli that he had won the 1986 World Cup with Argentina.

The epitome of history.

This will be a historic occasion and playing at the 'Holy Grail' of Diego Maradona will surely inspire Lionel Messi to give his best on the field. Napoli manager Gennaro Gattuso was full of praises for the current Barcelona captain as he said ‘Messi is an incredible player. He's an example for everyone, young and old.’

(The above story first appeared on LatestLY on Feb 25, 2020 08:50 AM IST. For more news and updates on politics, world, sports, entertainment and lifestyle, log on to our website latestly.com).