David Beckham's club can come with an audacious offer to bring Lionel Messi to the USA. Jorge Mas, the owner of Inter Miami, said, "Can it happen? Look, we’ll push. I’m an optimist at heart. Could I see that happening? It’s a possibility," 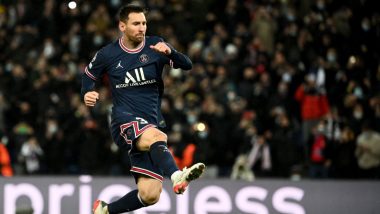 Inter Miami, a club in USA's Major League Soccer are targetting a sensational swoop to sign Lionel Messi. The Argentine moved just last summer to Paris after a glittering career at Barcelona and now according to reports, Inter Miami could come looking for him. David Beckham, one of the world's most popular footballers, has a stake at the club. Kylian Mbappe Defends Lionel Messi After Argentine Faces Backlash Owing to his Current Form, Says 'Even With Seven Ballons d'Or You Have to Adapt'

Jose Mas, an owner at the club,  said, "I think, and David has a relationship with him, if he does leave PSG, at the time he leaves it, we’d love to see Lionel Messi be a player at Inter Miami and be part of our community."

"Can it happen? Look, we’ll push. I’m an optimist at heart. Could I see that happening? It’s a possibility," the Sun quoted him saying. Messi, for the record, had earlier said that he wishes to compete in the MLS someday. Messi is not having a good campaign as per his standards and this can possibly lead him to head to the USA, provided a good offer is put on the table from Inter Miami.PSG had signed Messi last summer on a two-year deal with an option of extending it by another year.

Despite not having scored many goals, Messi has been constantly rising up the assists' chart. He currently has eight assists to his name in Ligue 1. As a matter of fact, he has now provided assists in five straight matches.

(The above story first appeared on LatestLY on Feb 28, 2022 06:44 PM IST. For more news and updates on politics, world, sports, entertainment and lifestyle, log on to our website latestly.com).