Sources have revealed that the video call Messi made to his family after Argentina won the Copa America last month, was actually part of WhatsApp's promotions. 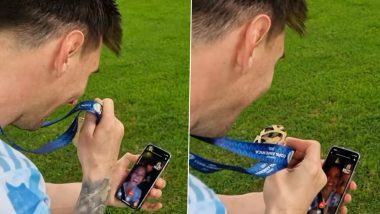 Argentine star Lionel Messi memorably led his side to the Copa America title earlier this year and he was an emotional man after the win. He was seen hugging out his teammates and shedding tears after the win. After a point of time, Messi also took his phone and made a video call to his wife Antonella Roccuzzo, where he was seen showing his winners medal. But there have been several reports in the English media that the video call Messi made to his wife, was actually a paid promotion! Yes, you read that right. It was a paid promotion of the popular messaging network WhatsApp and it was also revealed that the 34-year old made the video call on that platform. However, it is unknown as how much money he was paid. Lionel Messi Enjoys Football With Family and Friends During Vacation (Watch Video)

Messi even posted a video from that call a few days ago on this Instagram page. He captioned it, "What a special moment This was just after the final when I was celebrating the Copa America win with my family in a WhatsApp video call.

The six-time Ballon D'or winner is currently having a time off with his friends and family after what has been a memorable time for him with the national team. After years of toiling and reaching finals, Messi and Argentina were ultimately able to break their finals jinx as they defeated defending champions Brazil to lift the Copa America title last month. Cristiano Ronaldo vs Lionel Messi Could Happen if Barcelona Announces Argentine’s Contract Before Joan Gamper Trophy 2021 Finals

However, there's still uncertainty hovering over the star player's future in club football. Messi officially became a free agent in July and despite reports emerging that Barcelona are confident of tying him down to a new contract, there has been no such contract signing renewal yet.

(The above story first appeared on LatestLY on Aug 01, 2021 07:50 PM IST. For more news and updates on politics, world, sports, entertainment and lifestyle, log on to our website latestly.com).