Lionel Messi's team Argentina has reached the finals of the Copa America 2021 finals after beating Colombia in a dramatic penalty shootout. Now ahead of the finals, Lionel Messi's team was seen sweating it out ahead of final match. A few members of the team shared the snaps of their practice sessions on social media. 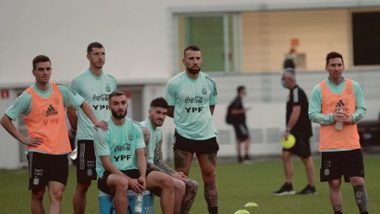 The fans are quite excited for the match as this will be a face-off between Messi and Neymar. The fans have already started sharing their excitement for the game as the former Barcelona stalwarts will take on each other. In fact, the last time when Barcelona took on PSG in the Champions League 2020-21, Neymar was not a part of the squad and thus the fans missed watching the two stalwarts taking on each other.

Now, check out the pictures below:

Neymar's team has also been sweating it out for the finals. The match would turn out to be quite an interesting one. So far Lionel Messi has scored four goals in Copa America 20201. Colombia will take on Peru for third place on July 10, 2021. The match will take place at 5.30 am IST. Do stay tuned to this space for all the live updates of the game.

(The above story first appeared on LatestLY on Jul 09, 2021 04:27 PM IST. For more news and updates on politics, world, sports, entertainment and lifestyle, log on to our website latestly.com).