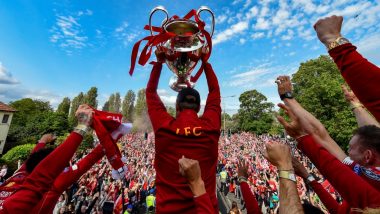 Liverpool has won five Champions League titles so far and they had last won the league title last year by beating Tottenham. The team picked the UEFA Champions League 2018-19 title by beating Tottenham by 2-0 at the Estadio Wanda Metropolitano in Spain. Needless to say that the fans have been enthralled with the win and were celebrating their hearts out. Now, Liverpool also shared the videos of the same and also went to give out a message for their fans and also gave a message to stay safe. Photo of Sadio Mane Carrying Broken iPhone Screen Guard Goes Viral, but It’s Liverpool Footballer’s Modest Reason for Not Repairing Will Leave You Amazed!

Talking about the match last year which was held on June 1, 2019. The Reds were on fire since the start of the game. It was Mohamed Salah who was the first one to convert a penalty into a goal right within the first two minutes of the match. The teams remained on 1-0 until the half-time and then Divock Origi sprang into action and then slammed a goal at the 87th minute of the match. The scoreboard read 2-0 and the Reds walked away with the title. Needless to say that the team and the fans went berserk celebrating the win. Check out the video of the game and then the clips of the match.

Half-time in Madrid and the Reds lead, after Mo's early penalty.

We have done it

That was for you ❤️

A great afternoon a year ago, now remember to stay safe and look after eachother 🙌 pic.twitter.com/P9ILttjDQG

Cut to this year, the coronavirus had brought all the live-action to a grinding halt due for a couple of months now. The teams have returned to the practice session and have been sweating it out at Melwood in groups.

(The above story first appeared on LatestLY on Jun 02, 2020 08:10 PM IST. For more news and updates on politics, world, sports, entertainment and lifestyle, log on to our website latestly.com).